Co-Player of the Year: Anna Schlaak 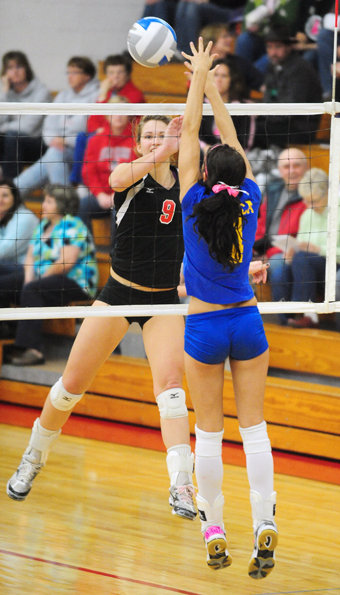 The New Richland-Hartland-Ellendale-Geneva senior, who became known by opposing coaches are a nightmare to scheme around, rewrote the program’s record books over her four-year career. The 5-foot-11-inch outside hitter set single season and career records for service aces and kills, and a career record for digs and ace blocks..

She did it in convincingly, too.

Schlaak recorded 477 kills this season, beating her previously record of 377, set in 2009 when she was first named All-Area Player of the Year, by 100. She is also third all-time with 283 kills her freshman season and ninth with 244 last year after she suffered an abdominal injury and was moved to libero midway through the season. Four seasons of dominance landed her atop the career kills list with 1,381. The previous record was 646.

“It’s good,” Schlaak said. “It’s kind of a big deal that it will always be in the record books and written down.”

Schlaak also set a single-season record with 108 service aces this year, crushing the previous mark of 59

set by Amanda Hullopeter in 1998. The senior finished with 194 for her career, another top mark.

Schlaak notched the fifth most digs in a season this year with 289 and first all-time over a career with 741.

Schlaak led the Panthers to a 23-7 record this season and second place finish in the Gopher Conference. The Panthers ran into LeSueur-Henderson in the Section 2AA South finals at Gustavus Adolphus College in St. Peter and were edged 3-1. Schlaak said it was her goal to go four games against LeSueur-Henderson, who swept the Panthers during the regular season.

“They were a really good team and we needed to play our absolute best,” Schlaak said. “That was everybody’s goal.”

At the start of her junior season, the Panthers hired a new coach, Joe Kuechenmeister, who Schlaak said helped her teammates believe in each other and led the team to a 41-18 record over the past two seasons.

“Joe would always tell us we could be thrown into any position and succeed,” Schlaak said. “We weren’t stuck with four back row specialists. We could move around easily.”

Schlaak may have moved around the most.

While she thrived at the net and have a kill efficiency rating of over 50 percent, she often was placed in the back row to return serves. She was also the team’s most aggressive server, and while she served at 87 percent, one of every three serves that was in was an ace.

Schlaak enjoyed being under pressure but said, like anyone else, sometimes it got the best of her.

“When you make a mistake, and it happens to everybody, where you focus on it too long,” she said. “But if you forget about it fast enough it works out.”

Schlaak said her favorite memories from her high school career were when she was having fun with her teammates.

“I’m going to miss the days of practice where everyone was silly,” she said. “This year we went out toilet papering for Homecoming Week and had to come into practice the next day. Practices were the best part of it all.”

While she hasn’t been told by her college coaches what she needs to improve on to make the transition to the next level, Schlaak said she is working on going into her first practice in shape.

“I need to basically improve on everything,” she said. “We can never stop learning. It will always help. Playing volleyball at Concordia is basically going to be my job.”