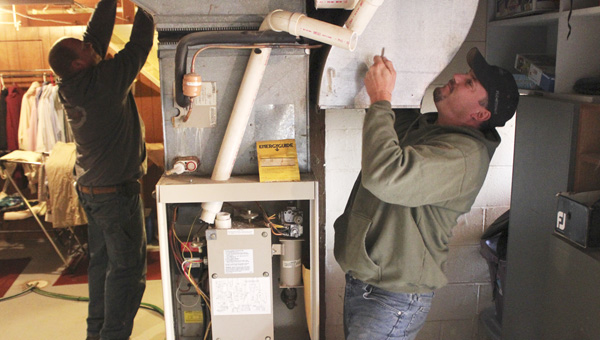 Jim & Dude’s Ross Anderson, left, stands on his tippy toes while Kirk Petersen holds up a vent Monday during the uninstallation of a furnace in Bob and Lisa Sturtz’s basement. -- Tim Engstrom/Albert Lea Tribune

When the carbon monoxide detector beeped on Sunday at the Sturtz household in the Shoreland Heights neighborhood, suddenly it all made sense.

It all began the Monday before. Lisa had severe migraines and felt sick to her stomach. On Wednesday, she saw a doctor and got a prescription to dull the pain. But this migraine was different than the ones she normally is susceptible to because after the medicine wore off, it came back.

Bob hadn’t felt as sick because he had been out of the house more, like Friday night when he went to pick up pizza or on Saturday when he raked leaves.

On Saturday, Lisa awoke with a severe headache, where even small lights made her eyes hurt. She slept most of the day in a chair in the TV room, right next to two vents.

“She was absolutely in the wrong spot,” Bob said

On Sunday, he began to feel sick, too. Bob had been trying out his inversion table, even watching a few moments of the Minnesota Golden Gophers football game upside down. Perhaps, he thought, he was feeling sick because of his new toy.

Bob bounded up the stairs to the kitchen and walked past the carbon monoxide detector. Coincidentally, that’s when it beeped. The dog began to bark. Bob removed the detector from its mount and couldn’t understand the readings.

However, he now clearly understood why he and his wife were feeling ill.

“It was like a bolt of lightning hit me in the head. It was like, ‘Why didn’t I figure this out before?” Bob said.

He went online to better understand the detector. The article said he should call the fire department. He did.

Albert Lea firefighters came over. Their monitor found 35 parts per million of carbon monoxide in the home. Firefighters recommend children exit a place at 15 ppm and adults should go at 30 ppm.

So the Sturtzes spent Sunday night at Bob’s father’s house.

There, Bob called an old friend, Dennis Bergstrom, co-owner of Jim & Dude’s Plumbing, Heating & Cooling. The next morning, he sent two men over to replace the furnace. The furnace at the Sturtz house hadn’t been replaced since the mid-1980s.

Bergstrom said, like with many old furnaces, the seams on the tubing of the heat exchanger had separated suddenly.

“The older ones crack, split or, in this case, pop. Many new furnaces are seamless,” he said.

He recommended that when people purchase a modern furnace, they go for the ones with seamless, stainless steel tubing and a lifetime warranty on the heat exchanger, plus at least a 10-year promise on the parts and equipment.

Late fall is a common time for carbon monoxide problems, Bergstrom said. Furnaces are running for the first time in months.

“The other time of year is when we have extended cold spells and the equipment is working extremely hard, and that can exasperate the problem,” he said.

And when people get sick, they think it is seasonal bug.

“They aren’t inclined to even think of carbon monoxide,” Bergstrom said.

There is one rule about burning anything, even natural gas, said Capt. Mark Light of the Albert Lea Fire Department: “Whenever anything burns, there is always carbon monoxide produced.”

It is colorless, tasteless and odorless. That’s why the Fire Department encourages detectors and has a program to get them in the hands of low-income people who can’t afford them.

“Unless you’ve got working monitors in the house, there is no way of finding it,” Light said.

Carbon monoxide accumulates in the circulatory system. It bonds to red blood cells better than oxygen, he said. Too much accumulation can be fatal.

“You can suffocate from having no oxygen going to your organs,” he said.

For people who want to confirm the safety of their residence or business, the Albert Lea Public Library has carbon monoxide detectors local residents can check out for a few days.

“We call it the great imitator,” he said.

He said medical responders often find CO poisoning happening in garages in the winter. A person might be fixing a snow blower or a motorcycle but won’t open the garage door.

He said they also find that in new houses, built more tightly than older ones, CO from running a gas stove and oven can elevate levels, particularly during holidays when ovens and stoves are used more frequently.

Fortunately, Mayo’s emergency medical services now come equipped with monitors that measure CO levels in blood. That’s good because CO poisoning often goes unnoticed by medical staff unless there is some sort of situational clue, like a man in a garage.

“Once the hospital has knowledge of carbon monoxide, it won’t be missed in the beginning,” Juntenen said.

“Today is the first day I feel normal again,” Lisa Sturtz on Tuesday. “And it feels great.”

Before the detector beeped, CO poisoning never crossed her mind.

“It was one of those things you look back and notice all sorts of subtle, little clues,” she said.

For one, the migraine wouldn’t go away. But also the dog was acting unusual.

“He would come in and immediately want to go outside. We wonder if he wasn’t detecting something we could not,” Lisa said.

She still wonders how long it wouldn’t have taken to figure out the cause of her illness, if it hadn’t been for the detector.