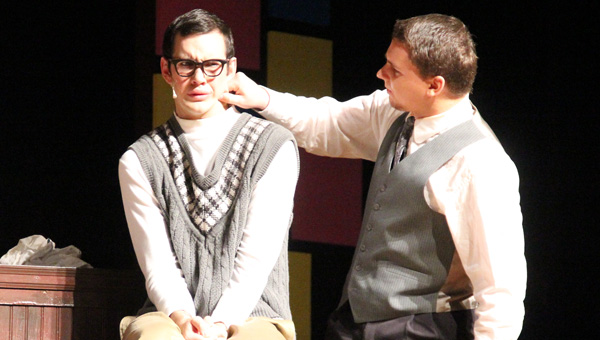 A big, lively cast put on a matinee show of “Bye Bye Birdie” for some students and senior citizens Wednesday afternoon.

About 50 students make up the cast that will perform the classic musical comedy that opens at 7:30 p.m. today. The musical also has showings at 7:30 p.m. Friday and Saturday.

“This is one of my favorite shows as it is full of energy, lots of color and has some catchy numbers that will stick with you after you leave the performance,” director Molly Grimmius said. 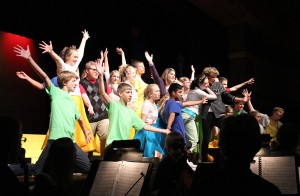 Some of the cast of Albert Lea High School’s “Bye Bye Birdie” perform a musical number for the crowd during a matinee Wednesday. -- Kelli Lageson/Albert Lea Tribune

The show, set in the 1950s, follows a teen pop sensation, Conrad Birdie, who gives one last kiss to a teen from Ohio before going into the Army. The show features well-known numbers like “Kids,” “Put on a Happy Face” and “Rosie.”

Grimmius said she loves shows that can put the audience in a good mood, and “Bye Bye Birdie” is one of those. The show also features a large cast, and that was challenging at times with some newcomers to theater.

“It is always difficult competing to get students to practice when they are involved in so many things,” Grimmius said.

Though she’s glad students are involved in different activities, it was sometimes a challenge to plan practices. The show also featured a lot of students who were new to theater, so she had a chance to teach the basics of theater. One of the newcomers was Quinn Andersen, who’s a ninth-grader.

Larry Holcomb, a sophomore, said he enjoyed the costumes in the musical. Andersen said some of the girls cut out felt shapes and decorated their own costumes. The show runs about 2 1/2 hours and is family-friendly.

“It was a great show to choose for bringing in some new actors and actresses and teaching them about what it is to be in a high school musical,” Grimmius said.

The musical is also an ensemble show, which means much of the cast is featured for a majority of the time. Auditions for the musical were held in September with rehearsals starting soon after.

Grimmius also mentioned that John Fure created the colorful set, and that the show would not be possible without Diane Heaney, who was the music director and pit leader. Tickets are $5 for students and $7 for adults and can be purchased at the door or before the show at Doyle’s Hallmark and Addie’s Floral & Gifts.