Day one is underway 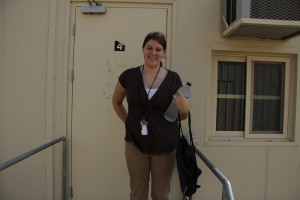 Me standing outside my room at Camp Buehring.

I don’t have a ton of new information to post, but I did get my photo taken this morning! This was right after a couple of interviews for Monday’s paper. I plan to do a profile each day on one Albert Lea and one Austin soldier. I’m getting the photos ready now and will write those later (sneak preview: the soldiers I interviewed are Spc. Kyle Davis and Spc. Noah Snater.)

This afternoon I will work on the package story, which will likely be about a group of local soldiers who are about to head out on a mission. Then later I’ll be covering the Vikings cheerleaders event later tonight.

Personal updates: Sleeping was OK, I woke up a little in the middle of the night to some heavy winds and light rain. This morning I had a yummy made-to-order omelette at the chow hall with some coffee! Other than that I’m trying to drink as much water as possible!