Day two is coming to a close… 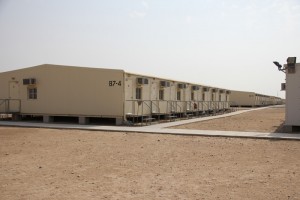 The outside of some of the housing units at Camp Buehring. There are also air-conditioned tents that house soldiers. -- Kelli Lageson/Albert Lea Tribune

I would have written earlier today but today was busier in the early part and I have some down time now. This will be a long post to warn you! As I start writing this it’s 8:30 p.m. here and 11:30 a.m. in Minnesota. I just sent stories for Tuesday’s paper that I wrote today. I plan to get an early start again tomorrow to start working on stories for Wednesday’s paper!

Life at my CHU

So I’m not completely sure what CHU stands for, Google says it means Container Housing Unit, and I’m not near any of my guides to ask. Anyway that’s what they call our housing. My little unit has two bunk beds and can hold four people. Two more women just moved in who work for intelligence. So now my room is full! The other women seem nice, but it is an adjustment to get used to sharing a bedroom with others when I don’t back in the states. I can see how it can be an adjustment for soldiers when they have to live with others and deal with having different work and sleep schedules.

In my CHU, other than the two bunk beds we have four standing closets that have shelves and a side for hanging clothes. Mine easily fit everything I brought for the week, but the women I’m sharing with are here longer and have a lot more stuff! We have one little window that has a dark curtain over it that keeps out the sunlight, and a door that leads out to three steps connected to the sidewalk.

We’re right across from the bathroom/shower/laundry facility, which is nice. There are eight shower stalls, and six sinks and stalls on the other side of the bathroom. I haven’t had to wait to use any of it yet, but I’m assuming there can be busy times as well.

Some soldiers live in units that can hold up to six, or in tents that hold many soldiers. Every single housing unit or tent is air-conditioned because of how hot it can be. One sergeant said everything has to be air-conditioned because some of the units are metal and would literally cook people. When it does get up into the 120s even with air conditioning it’s often around 80 degrees in the units. Lately the weather has been really cool, so we actually have our air off right now. At night I’ve been wearing the fleece jacket I brought, and then I’m comfortable. I’m usually comfortable during the day wearing long pants and a T-shirt. It’s usually windy, and now that it hasn’t rained in a day it’s getting dustier.

Today I did breakfast at the larger dining facility (there are two, and lots of debates about which one has less wait time, but I haven’t seen a difference yet). I had some Honey Nut Cheerios, toast and coffee. Like usual, I grabbed a bottle of water like I try to at each meal to remind myself to be drinking water. It’s not really that hot out at all, but I still feel dehydrated sometimes. Then for lunch, this time at the smaller dining facility or DFAC, I had spaghetti, a salad and garlic bread. For dinner, again at the smaller DFAC, I met up with Pfc. Aaron Enderson, who’s from Hayward and an old friend, and had dinner. I tried a turkey wrap with veggies and it was really good! I can see why soldiers choose to eat healthier foods (even though they do have not-so-great options) at the chow hall for free instead of going out to eat at some of the restaurants and paying for it. I’ve overheard more than one soldier speak lovingly about the Great Steak & Potato Company on base, but have also heard it’s pricey. I haven’t had to eat any MREs, or Meals Ready to Eat, since those are only eaten out on missions and I’m not going off the base.

Today I met with two soldiers to do the two daily profiles I’ll have in the Tribune. I then had some time to write those stories. Then I worked with my guide to find more local soldiers to seek out so I can have lots of different input. After lunch I met up with two Albert Leans to do a special video project that I’ll have completed when I get back sometime next week. Then it was up to the BAS, or Battalion Aid Station, to do a feature on the medical care available. It just so happens that the guy in charge is a friend from college, Sgt. 1st Class Trevor Gibbs, so it was fun to see him as well, and I think we’re going to have coffee tomorrow morning at one of the coffee shops on base. I’ll try to remember to take a photo! Then it was back to my bunk to write the story and get all the photos ready, then dinner, then a shower, now blogging!

As always thanks for reading!