The funeral service for Deloris Viola Peal King, of Albert Lea, will be held at 11 a.m. Tuesday at the First Lutheran Church of Albert Lea. The Rev. Dan Baker will officiate. Interment will be in Graceland Cemetery. Visitation will be from 5 to 7 p.m. Monday at Bonnerup Funeral Service, and one hour before the service at the church. 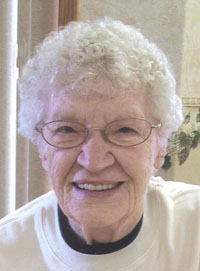 Her parents moved to Albert Lea in 1927 and eventually Deloris became the oldest of “The Five Peal Girls.” She attended Ramsey Elementary School and Albert Lea High School.

Deloris married Franklin King on Feb. 20, 1939, in Northwood, Iowa. They were the parents of six children. She worked at the Candy Counter at Woolworth’s for 10 years in the 1940s and 1950s. In February 1987, she retired from Naeve Hospital after 15 years as materials management aide.

Her first love was her family including the extended King and Johannsen families. She was a member of First Lutheran Church since 1927, their Mission Circle No. 9 for over 40 years and spent over a decade as the Bible study leader. The Altar Guild was another activity she enjoyed. She was a Girl Scout leader for her daughter Linda for five years. Other volunteer groups she participated in were the Red Cross Bloodmobile, Senior Citizens and the Naeve Hospital Auxiliary.

Her hobbies included reading, crossword puzzles and attending parades. She enjoyed her Bible and doing Bible studies. She loved scrabble. Her daughters share an interest in needlework and crafts.

Deloris was very proud of her German heritage and enjoyed a trip to Germany with her daughter Linda in 1981, to visit her son Larry while he was stationed there with the United States Army. Other trips to visit family members included locations such as Florida, Colorado, Tennessee and Canada. She and Frank enjoyed many trips to Pine River. Deloris instilled in her children a strong Lutheran faith, a passion for reading and a desire to serve others through organizations and every day activities.

She was preceded in death by her husband, Franklin, in 1987; and infant son in 1948; her parents; in-laws: George and Anna King; daughter-in-law, Rosemary King; sisters and spouses: Lois and Francis Peak, Dorothy and Donald Godtland, Russell Stiehl, Werner Bangert and Richard Jackson; and nieces and nephews.

Memorials preferred to First Lutheran Church or Peace and Power.