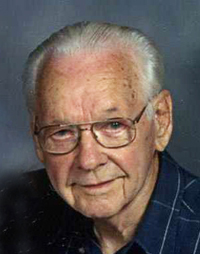 The service honoring Earl’s life will be 1 p.m. Monday at St. Olaf Lutheran Church in Fort Dodge with the Rev. John Sersland officiating. Entombment will be in Chapel of Peace Mausoleum at North Lawn Cemetery. Military honors will be presented by VFW Post No. 1856. The visitation is from 4 to 6 p.m. Sunday at the Gunderson Funeral Home & Cremation Services in Fort Dodge. Memorials may be directed to the St. Olaf Foundation.

Earl is survived by his wife Pearl; his daughter, Janice (Woody) Ferry, of Minneapolis; two granddaughters and five great-grandchildren; his siblings: Kenneth (Lois) Olsen, of Albert Lea, Donald (Mitch) Olsen, of Alamagordo, and Carol (Vernon) Christianson, of Lakeville; and many nieces and nephews. He was preceded in death by his parents; his siblings: Arlene Hanson and Warren Olsen; a brother-in-law, Phil Hanson; and two sisters-in-law: Norma Olsen and Betty Olsen.

Earl Floyd Olsen, the son of Peter and Myrtle (Hagen) Olsen, was born June 8, 1921, in Albert Lea, where he was reared and educated. He also attended Dunwoody College in Minneapolis. Earl served in the United States Army Air Corps during World War II and was discharged in 1945. On Jan. 25, 1945, Earl was united in marriage to Pearl J. Knudtson in Tampa, Fla. The couple lived in Albert Lea, St. Paul, Harlan, Iowa, and Oregon, Ill., before coming to Fort Dodge. Earl worked in the lumber business for many years managed the Fullerton Lumber store in Fort Dodge. He was employed with Sears for more than 21 years before retiring in 1983.

Earl was a member of St. Olaf Lutheran Church where he was a deacon and taught Sunday school. He was a past commander of the American Legion and enjoyed hunting, fishing, golf, playing bridge and he created many unique wood carving pieces. He and Pearl enjoyed many winters together in Harlingen, Texas.