Memorial services for Esther Helen Hanson, 80, of Mountain Home, Ark., formerly of Albert Lea, will be held at 2 p.m. Saturday at Bayview/Freeborn Funeral Chapel. The Rev. Milton Ost will officiate. Interment will be at Graceland Cemetery. Visitation will be one hour prior to the service. 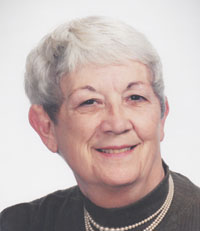 Esther Helen Hanson was born on Feb. 14, 1931, in Clay Center, Kan., to Roy and Helen (Vesterberg) Trickle. She moved to the Mason City, Iowa, area and graduated from Mason City High School. On Aug. 21, 1949, she married Virgil E. Hanson at The Little Brown Church in Nashua, Iowa. The couple made their home in the Albert Lea area where Esther worked for the ARC and was a homemaker. In 1987 they retired and moved to Mountain Home, Ark. Esther was a bird lover and enjoyed watching the birds in her yard. She always had a beautiful backyard flower garden. Esther was a member of Redeemer Lutheran Church in Arkansas and a former member of Grace Lutheran Church in Albert Lea. She enjoyed bowling, fishing, snowmobiling and spending time with her family.

Esther was preceded in death by her parents and husband, Virgil.