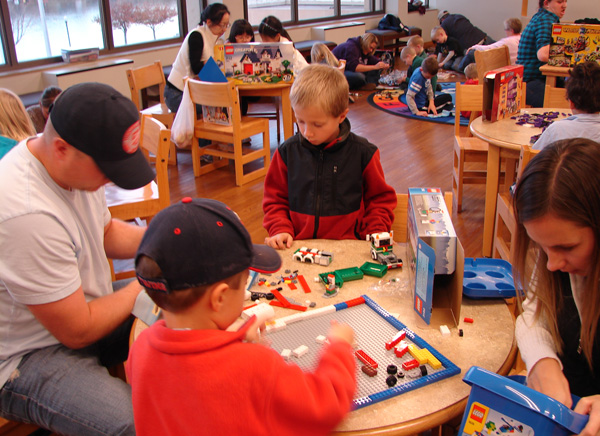 Over 80 children and parents poured into the Children’s Library to participate in the first meeting of the Lego Time. Children’s Librarian Patty Greibrok had a variety of the kits and books ready so everyone could start building. Fathers, mothers, grandfathers and grandmothers were helping their children, or maybe it was the other way around, build their project.

One of the many reasons they are so popular in Albert Lea is because of the Danish connection. Lego Corporation was started in Denmark in 1932 by Ole Kirk Christiansen who made wooden toys. The word Lego is from the Danish phrase leg godt, which means “play-well” and millions of children have done just that. The well-loved Lego bricks were patented on Jan. 28, 1958, and they have given generations hours full of creative and challenging “building.” Lego Time is designed to offer that same opportunity to the next generation of Albert Lea citizens with the added bonus of expert help from the past Lego generation.

Of course, there has to be a connection between Legos and books. Research has found that promoting play contributes to early literacy development by increasing attention span, memory, creativity, and language and vocabulary skills. All that being said there are also lots of books about Legos. In 2009 DK Publishing formed a partnership with Lego to publish a series of books and now has 25 Lego titles in its catalogue. In the last two years they have sold more than 6.5 million books, literally saving a publisher and most titles are available at the library.