In the St. Nick of time

A small plastic and fabric Santa Claus sitting next to a lamp caught fire at a house on Hawthorne Street Wednesday morning, causing mainly smoke damage.

Homeowner Sylvia Johnson said she had just come home to 1309 E. Hawthorne St. from Grace Lutheran Church a little before 11:30 a.m. when she walked into the house and smelled smoke. 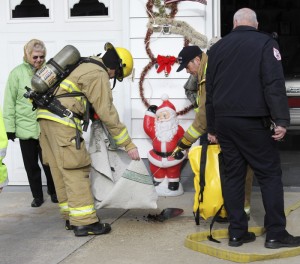 Shortly after, she heard the fire alarm go off in the basement, and she called 911.

Dispatchers advised her and her husband, Edwin, who had already been in the house, to leave.

A few minutes later, firefighters could be seen carrying the blazing Santa Claus outside on a rug, and then water was sprayed onto it to put out the fire.

Albert Lea Fire Capt. Lee DeVries said it appeared the Santa Claus decoration had ignited from being too close to a lamp.

He reminded people as they are decorating to use extra care in making sure decorations are set out safely.