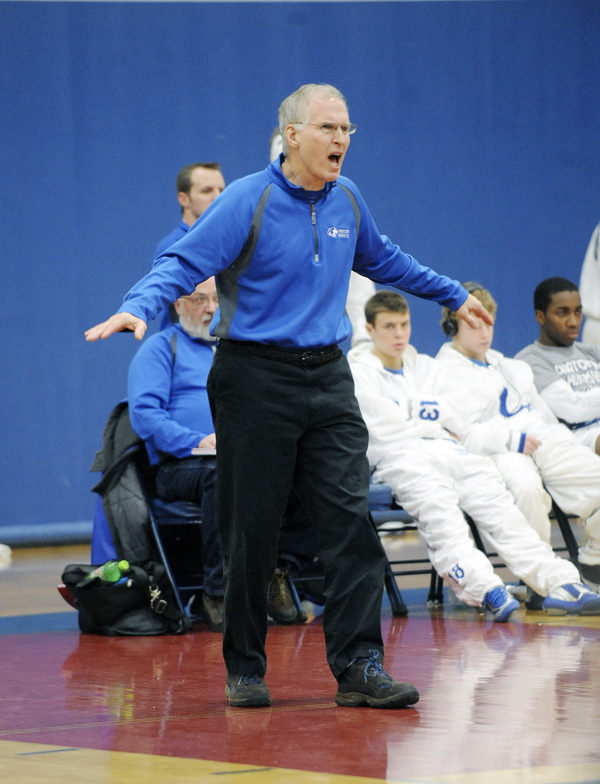 Former Owatonna wrestling coach, Scot Davis, above, retired at the end of the 2010-11 season but has since been suspended for recruiting. -- Andrew Dyrdal

Davis coached wrestling at Owatonna since 1986

OWATONNA — Longtime Owatonna wrestling coach Scot Davis retired earlier this year, but he would not have been allowed to coach the Huskies this season and pursue his 1,000th career victory anyway.

Davis is not mentioned by name in the minutes from the meeting, though the document refers to Owatonna’s “former wrestling head coach.” Davis was the head coach at OHS from 1986 to 2011.

Linda Skrien, the Owatonna School District director of human relations, said that the district conducted an investigation after receiving a complaint alleging possible violation of MSHSL rules. Davis retired from teaching and coaching prior to the completion of that investigation, and Skrien said “no disciplinary action was taken.”

Davis did not return messages left at his home and on his cell phone, and Owatonna Activities Director Ryan Swanson referred all questions to the district office.

According to the MSHSL meeting minutes, the coach was penalized under the high school league’s bylaw 308, undue solicitation of a student. The People’s Press received emails sent to and from Davis’ personal and school accounts in July and August 2008 to the family of a wrestler in California. There are also email conversations between Davis and several businesses in Owatonna, another family, and Owatonna wrestling supporters.

The emails indicate that Davis talked on the phone and emailed in an attempt to recruit Jake Briggs, a middleweight wrestler that was a three-time state placewinner and four-time state qualifier in California. Briggs is now a sophomore wrestler at Boise State.

According to the emails, Briggs came to Owatonna for a wrestling camp earlier in the summer of 2008, and it is apparent he made an impression on Davis.

“I think Jake has a shot at winning an individual state title,” Davis wrote to the Briggs family. In another, he wrote, “I look forward to having Jake Briggs step on the mat for Owatonna High School this winter, and I’m going to keep that dream alive so it can happen.”

The Briggs family is friends with the Thomas family, formerly of Owatonna. Tyler, Trevor and Tanner Thomas were all part of the wrestling program, and parents Matt and Tami Thomas were heavily involved with the Owatonna Wrestling Association. Matt served as vice president and website coordinator, while Tami was the OWA secretary. In the emails, Davis implies that the Thomas family, which moved from Owatonna to Michigan earlier this year, helped recruit Briggs.

“As I’ve told you, wresting is big here in Owatonna and we have many contacts,” Davis wrote in a message to the Briggs.