Memorial services for Gail Ann (Randall) Jorgenson, of Albert Lea, will be held at 3:30 p.m. Thursday at First Presbyterian Church. The Rev. Dwight Netzer will officiate. Interment will be at Hillcrest Cemetery. Visitation will be one hour prior to the service at the church. 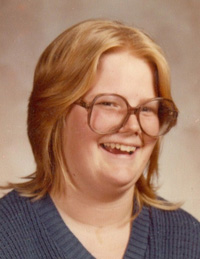 Gail died Saturday, Nov. 5, 2011, at her home, due to complications of Oslo-Weber Syndrome, also known as HHT. Gail has courageously battled this disease for over the past decade.

Gail Ann Jorgenson was born Aug. 20, 1965, to Roger (Red) and Helen (Schroeder) Randall in Albert Lea. She was raised in Albert Lea and attended Central High School. On Aug. 16, 1997, Gail was united in marriage to Steve Jorgenson at Catherine Island in Albert Lea. She was a member of the First Presbyterian Church, Grace Lutheran Church, and Austin VFW. Gail enjoyed watching the Minnesota Vikings and Minnesota Twins. She also enjoyed playing Bingo, family camping trips, fishing with her daughter, conversing with friends and family on Facebook, and challenging her skills on games like Pogo and Trivial Pursuit, and watching Survivor.

Gail will be greatly missed by her family and friends.