Memorial services for Gary Lee Erickson, 79, of Albert Lea will be held at 11 a.m. Monday at Bayview/Freeborn Funeral Chapel. The Rev. John Holt will officiate. Military honors will be accorded by Freeborn County area veteran’s organizations. Interment will be at Ft. Snelling National Cemetery. Friends may greet the family one hour prior to the service. To sign the guest book, go to www.bayviewfuneral.com. 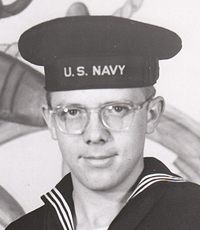 Gary Lee Erickson was born on Dec. 9, 1931, to Jordan and Esther (Pearson) Erickson in Gretinger, Iowa. He moved with his family to Albert Lea when he was 5 years old. He was baptized in Gretinger, Iowa, and confirmed at First Lutheran Church in Albert Lea. Gary graduated from Albert Lea High School in 1951. He served his country in the United States Navy from 1952 to 1955. In July of 1956, Gary was married to Shirley Steinhauer and had four children. They were later divorced. On Sept. 12, 1981, he was united in marriage to Barbara Johndo in Albert Lea. Gary worked as a carpet layer for Erickson Flooring and later for Floorcrafter’s until his retirement. Gary was a member of First Lutheran Church, a life member of the VFW and a past member of Green Lea Golf Course. Gary enjoyed golfing, fishing and bowling.

Gary was preceded in death by his parents; wife, Barbara; and his dog, Dolly.