Gathering to listen to stories of Kuwait 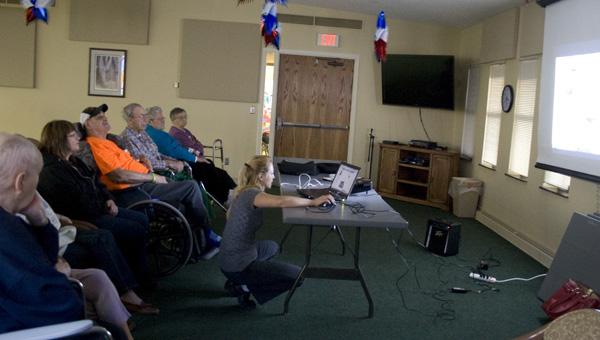 About a dozen residents and employees at St. John’s Lutheran Home gathered Wednesday around a big screen at the facility to read stories and watch videos of Tribune reporter Kelli Lageson’s coverage from Kuwait.

Lageson has been at Camp Buehring in Kuwait since the weekened. She is covering soldiers in the Albert Lea and Austin units, which are part of the 2nd Battalion, 135 Infantry Regiment, 34th Infantry Division, abbreviated as 2-135.

“As long as she wants it, I think it’s good,” said Lageson’s grandmother, Alice Lageson, who was one of the residents looking on. “Otherwise, I wouldn’t do it.”

Looking at the stories online — particulary one about the mail received for soldiers — sparked an interest by the residents to find something they could send in a care package. They planned to make a treat of some sort to mail.

The group also talked about a former St. John’s Lutheran Home employee who was in one of the stories.

The stories and videos hit home for St. John’s employee Colleen Bolinger, whose husband Spc. Tom Bolinger is one of the men deployed in Albert Lea’s unit.

While he has not yet been featured in a story, Colleen said it has been interesting for her to see what kinds of things her husband is going through. She noted he had recently gone to the aid station that Lageson featured Tuesday.

The group said they planned to check back in on the website as the week progresses. They were particularly interested in watching video coverage.

Coverage can be found under the series “Deployed in Kuwait” online and in print. Lageson is also describing her experience from a personal standpoint in her blog called “Kelli in Kuwait.”