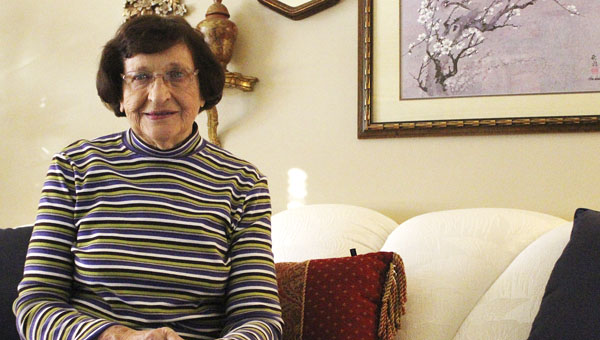 Living on her own, legally blind, with no family close by, and on an income that wouldn’t allow her to take taxis everywhere, an Albert Lea woman who lost her license a few years ago said she completely lost her freedom.

Bette Henrichs was diagnosed with macular degeneration about 15 years ago and was told she would have to stop driving about 3 1/2 years ago. She described herself as hysterical when she realized she would have no way to get around to doctor’s appointments, grocery shopping or any other errands.

“A lot of your freedom is gone,” Henrichs said.

When she learned about Ride Services, a program through Albert Lea’s Senior Resources, through Marilynn Borland, things started looking up. Borland is the coordinator for the ride and chore services Senior Resources offers.

“People call in and are upset due to losing their license,” Borland said.

Keeping seniors independent is the goal of Senior Resources, and Ride Services is one of the ways they can do that. Henrichs said she thinks she’d definitely be in a nursing home if it weren’t for the service, but now she’s able to live alone.

Borland often is able to help people calm down and walk them through how Ride Services works. She said she’s been told she’s good at helping with the transition. One of everyone’s main concerns is how they’ll pay for Ride Services. The service asks for $6 for each ride, but will stop at two places.

Borland said she tells people it costs more than $2,500 a year to own a car with gas and maintenance, which is much more expensive than using the ride service a few times a week. There are other perks, too.

“It’s door to door, there’s no parking,” Borland said. “And you get to build relationships.”

Henrichs agreed that one of her favorite parts of the service is the drivers, who are all volunteers who get paid mileage for driving.

“The drivers are so courteous and willing to help,” Henrichs said. “It’s very well worth it.”

One of the only challenging things with the ride service is that Henrichs has to call the day before and set up a time to be picked up. She often will call to ask for a ride to Mayo Clinic Health System in Albert Lea and then to go to Walgreen’s after, or she’ll request to go to Hy-Vee and Northbridge Mall.

“You have to be really organized,” Henrichs said. “But it’s very easy once you get used to it.”

Right now Ride Services has about 30 volunteer drivers, most of whom are over age 60, but that number fluctuates. Borland said volunteers include retired doctors, and retired law enforcement officials, among others.

“We can always use more drivers,” Borland said.

About 275 seniors use the service, and there are other ride services for veterans, county residents on medical assistance and others who qualify in the city. There are around 700 people in all who coordinate rides for various activities.

Five programs at Senior Resources are supported by the United Way of Freeborn County. Borland said they appreciate the funding from the United Way, but still also have to do their own fundraising through various events.

“Our seniors are an at-risk population,” United Way Executive Director Ann Austin said. “There are a lot of low-income seniors who are not as likely to ask for help.”

The other programs at Senior Resources that are supported by the United Way are Senior Advocacy, which helps seniors and caregivers learn more about keeping seniors living independently. Other programs are Chore Services, which provides outdoor chores, Family Caregivers, which supports those who are caregivers to seniors in a variety of ways, and Retired and Senior Volunteer Program, or RSVP, which seeks to strengthen the community through service and volunteering.