Give it away now 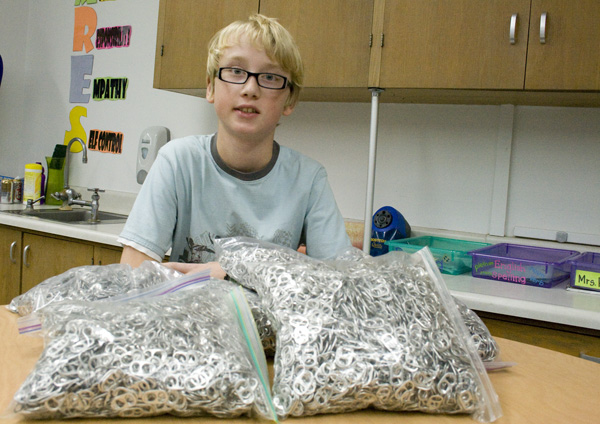 Halverson Elementary School fifth-grader Chance Palmer on Tuesday sits with 12 pounds of pop tabs he is donating to the Ronald McDonald House. He had been saving up the tabs since he was in first grade. -- Sarah Stultz/Albert Lea Tribune

Ever since he was in first grade, 10-year-old Chance Palmer has been collecting pop tabs.

It started out as a way to earn some extra money to put toward buying an iPad.

But last week, his plans changed.

Chance, who had collected more than 15,000 tabs, decided to put his collection toward a different cause.

Bringing in the tabs to Halverson Elementary School in six large bags — there were roughly 12 pounds — Chance pushed aside his hopes for a new iPad and turned over the tabs to his fifth-grade teacher Nancy Sorlie.

Sorlie will turn the tabs in to help the family of young Landon Uthke of rural Hollandale, who was injured last month after he was backed over by a riding lawn mower. His left leg was ultimately amputated at the knee.

The family, which includes one sibling at Halverson Elementary School, had utilized the Ronald McDonald House during Landon’s hospital stay.

The Ronald McDonald House provides a place for families to stay at little or no cost so they can be close by their hospitalized child.

People can raise money for the cause by collecting pop tabs. Ronald McDonald House Charities encourages people to collect pop tabs instead of entire aluminum cans because it’s more hygienic to store tabs than cans, and collection and storage is easier, according to its website.

People can contact the closest Ronald McDonald House to get a collection container for the tabs.

Maggie Schoepski, the community development director for the Ronald McDonald House in Rochester, said the per-pound rate of pop tabs is can be around 70 cents but lately has been about 60 cents.

She said the Ronald McDonald House in Rochester receives annual donations in pop tabs that amount to $10,000 to $15,000.

“All the money stays here to offset the cost of running the Ronald McDonald House,” she said.

“He’s been sacrificing something he’s been doing for a long time,” Sorlie said of Chance. “I thought this is really an amazing feat.”

She said she and her students had started talking at school about collecting the tabs, and Chance came forward with the idea. Amy Schuhmacher’s third-grade class also collected tabs.

“Chance realizes how lucky he is because we live out in the country, too,” his mother, Kris Gullord said. “He’s able to run around outside and play. He knows how lucky he is, so I think he felt really bad for this boy. It made him think about what it would be like.”

Chance said though he didn’t know Landon or his family, he felt like it was the right thing for him to do.