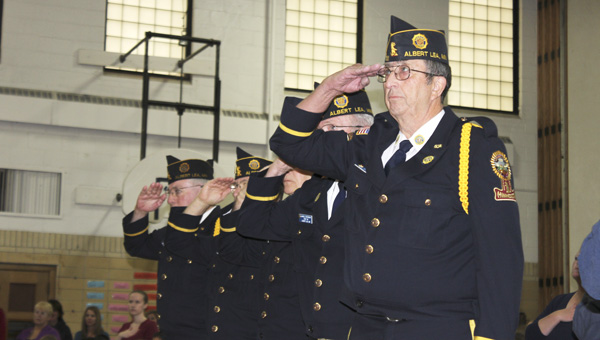 Hawthorne’s students pulled out all the stops to honor the local men and women who served in the military. Veterans appeared delighted by the presentation.

“It was great,” Staff Sgt. Les Shaunce, American Legion Post 56 member said. “It’s one of the greatest feelings in the world.”

Fifth-graders sang several patriotic songs, including the national anthem and “God Bless America.” In addition, fourth-graders shared their feelings about veterans and kindergartners honored veterans by asking them to stand based on which armed service they served.

“It’s a good learning tool to show the students what veterans are,” said Sherry Seberson, music teacher. Seberson said students have worked on the program for four weeks, with many classes contributing art and other activities to the program.