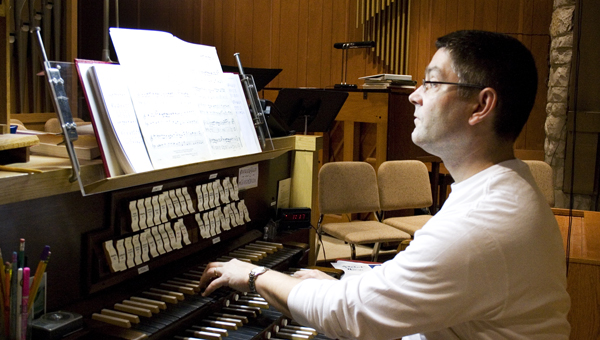 Up in the balcony at Grace Lutheran Church stands an instrument rich in history and sound.

A Schlicker organ, the instrument is patterned after ones in Germany, giving baroque sounds that are crisp and bright, according to Grace Lutheran Church’s music director Bob Tewes.

It is featured each week at the church’s regular worship services and accompanies the church’s adult choir. It is also a highlight at weddings in the church, is played during Albert Lea Cantori concerts and is used for private teaching purposes.

“It’s pretty well known up in Minneapolis as a fine instrument worth listening to,” Tewes said. 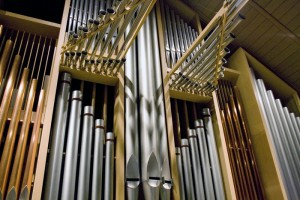 This Schlicker organ was installed at Grace Lutheran Church in 1971 after a fire at the church in the 1960s. There are 1,895 pipes ranging from as small as a pencil to 16 feet in length.

One of the three largest organs in Freeborn County, the Grace Lutheran organ has 38 ranks. The area’s other two large organs are at First Lutheran Church and United Methodist Church.

The First Lutheran organ has 52 ranks. The United Methodist organ has 35. Each produces a different sound.

Made up of 1,895 pipes, the Grace Lutheran organ is known for its high caliber, he noted. It contains both exposed and enclosed pipes ranging in size from as large as 16 feet tall to others as small as a pencil in diameter that are encased behind the organist. It also contains horizontal trumpet pipes, which can give off the sound of trumpets.

He estimated it would cost in excess of $1 million to replace.

“You’d have to go to the Cities or Rochester to see something of this caliber,” Tewes said.

What also makes it different than some, he said, is that it is mechanical, meaning it operates through the use of trackers. When the organist pushes down a key, this pushes down a lever, which ultimately leads to the sound. With electrical organs, like at United Methodist, the sound is more instantaneous. 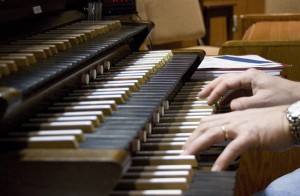 Bob Tewes plays on the lower division of keys on the Grace Lutheran Church organ on Friday.

Tewes, who has played organ for at least 30 years, said the tracker-style organs give the musician more control and gives a different sound compared to electrical organs. First Lutheran Church’s organ is also a tracker-style organ.

Grace Lutheran’s organ was installed in 1971, after the church had a fire in the 1960s. It was manufactured in Buffalo, N.Y., but was voiced with actual Germans who were sent here to set it up for the church.

“It was really to God’s glory to seek out the best for the congregation,” Tewes said.

About a year and a half ago it underwent renovations, where every single pipe was taken out and assessed and then put back in. Any problems were corrected, and Tewes said it plays like new.

He noted that people from out of town come to look at the organ, and many are impressed with its sound and appearance. He said the instrument is, of course, fun to play.

It is serviced by Obermeyer Organ Co. out of Burnsville.