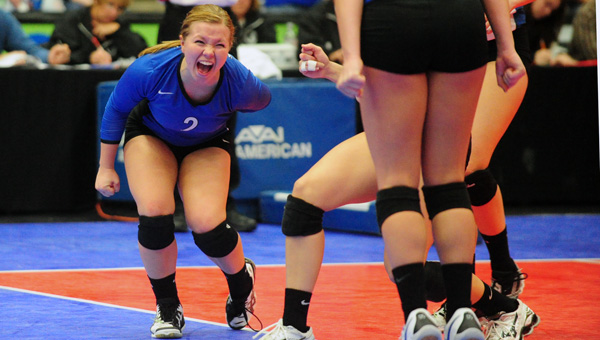 Dike-New Hartford's Sam Meyer screams after winning a point near the end of a 3-0 win over Lake Mills in the Class 2A semifinals. -- Andrew Dyrdal

CEDAR RAPIDS, Iowa — For the first time this season the Bulldogs didn’t celebrate after the final point was scored. 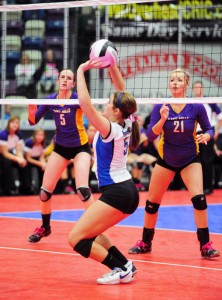 suffered its first loss of the season on Friday night, a season-ending defeat to Dike-New Hartford in the Class 2A semifinals at Cedar Rapids Ice Arena. The Wolverines swept the Bulldogs 25-21, 25-23 and 25-19, and held them from a second consecutive trip to the state finals.

“We wanted it so bad to the point that it kind of hurt,” said Bulldogs senior Shelby Kuper. “And now losing I can honestly say it hurts like hell.”

The third-seeded Wolverines (43-3) kept Lake Mills out of rhythm through the entire match, and the Bulldogs struggled passing out of Dike-New Hartford’s aggressive serves. Lake Mills held only two leads all night and neither lasted long.

“What they did to us is what we needed to do to them,” Bulldogs coach Jim Boehmer said. “Dike was able to beat us to the punch tonight. It took a good team to do it to us.”

Lake Mills finished the season 45-1 and tied the school record for wins in a season set during the state semis last year. More impressively, the Bulldogs dropped only five sets all season while winning 105.

“I’ll take this every year,” Boehmer said. “It hurts because it’s over but it doesn’t bother me that we have this loss.”

Boehmer said his players didn’t no how to react to their first loss in two days shy of a calendar year. The Bulldogs were 95-3 over the past two seasons and last loss in last season’s state finals to Western Christian.

“Their reaction was almost like: What do we do now?” Boehmer said. “And not being experienced with a loss is an alright trait. I’ll take that weakness.”

Josie Brackey had 13 kills, and Morgan Fjelstad had 34 set assists for the Bulldogs, who trailed much of the 63-minute match. 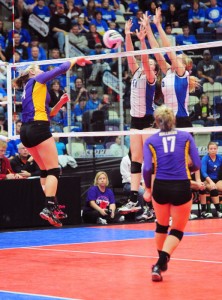 The Wolverines jumped out to a 6-1 lead over Lake Mills in Game 1, and after the Bulldogs pulled within two, extended the lead to 16-10, forcing Boehmer to call a timeout. Carlie Christianson notched one of her six kills out of the timeout, but the Wolverines scored three of the next four and cruised to a 25-19 win.

The Wolverines didn’t relent in Game 2.

After an ace serve to start the set, the Wolverines built leads of 3-1 and 7-5 off two of their 14 blocks. A kill from freshman Lizzy Blough gave Dike-New Hartford a 12-9 lead but the Bulldogs scored three straight to draw even.

Knotted at 13-13, the Wolverines went on a three-point run and gave themselves enough breathing room to hang on 25-23 as the teams traded points the rest of the way.

“We gave it a shot, we fought back,” Boehmer said. “We could have died in Set 1 and Set 2 but we didn’t. It wasn’t that they weren’t giving it everything they could.”

The Wolverines scored three straight points out of the gate in Game 3, but Lake Mills tied the match at six following two kills by Brackey. After falling behind 9-7, another kill and ace serve from Brackey, and kill by Kelci Larson gave the Bulldogs an 11-9 lead and signs of life as Boehmer leaped into the air.

It was short lived. 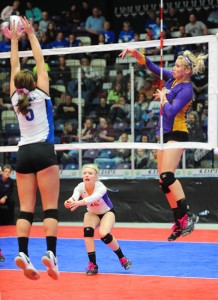 The Bulldogs will graduate four of six starters, including Brackey, Fjelstad, Kuper and Catherine Adams, along with seniors Kayla Krull and Sarah Hengesteg.

“I am so proud of my team and I love them so much,” Kuper said. “It makes me realize all good things can come to an end.”

Boehmer said the seniors legacies will live on.

“They set high standards for themselves and I can’t argue with that,” he said. “I told the girls in the locker room they are heroes to a lot of people. All they’to do is walk out here and there will be little girls looking up to them. I said that’s the most important thing what type of people you’re going to be. That’s what we pride ourselves on.”