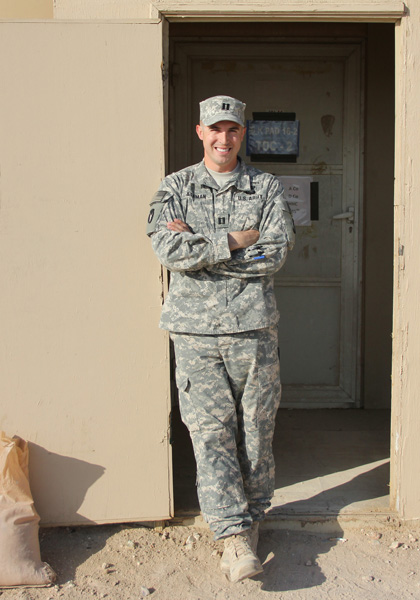 CAMP BUEHRING, Kuwait — The new leader of Albert Lea’s Delta Company was named commander Sept. 15 and has been leading local troops in their mission in Kuwait.

Capt. Eric Athman, 29, of Minnetonka, has been with the 2nd Battalion, 135th Infantry within the 34th “Red Bull” Division for nine years with Headquarters Company. He was previously a first lieutenant until a promotion Oct. 26. His main job is taking missions, analyzing them and delegating tasks.

“Within the four platoons I break down the tasks they need to do,” Athman said.

Athman said he has a group of supporting staff who help him with tasks.

“It’s been great,” Athman said. “We have a lot of competent officers and NCOs.”

NCOs are non-commissioned officers and are enlisted personnel, generally the sergeants.

Athman said his job has been a good challenge so far.

“These guys definitely know what they’re doing, which makes the cohesive effort a lot easier,” he said.

“He’s the best in the business,” Bakken said.

Athman said missions have changed since Delta Company has been in Kuwait, which can make every day different and he enjoys that.

Right now the mission is to help escort troops and equipment safely from Iraq through Kuwait. With the Iraq War ending it will likely have implications for the company, and the mission may change.

“I don’t know where that takes us,” Athman said.

He said he doesn’t think the company will be going home early, and rumors had been circulating that they would.

“It’s hard to predict what will happen,” Athman said. “We’ve had different missions since we’ve been here.”

One of the first missions was training to be a reactionary force, before it changed to help flow troops and equipment out of Iraq.

Athman is engaged to Mira Kamran, who is originally from Shoreview but now lives in Minnetonka. Their wedding date is planned for July 7, 2012, and the captain has been trying to help plan the event from Kuwait.

“We did Skype with a photographer,” Athman said.

Helping plan the wedding can be difficult with the nine-hour time difference, especially since he doesn’t have an eight-hour work day. He said he often gets into the office around 8 a.m. and stays around 12 to 14 hours, leaving to eat lunch and dinner. He also works most days of the week, and rarely has days off.

Athman is one of the few soldiers who bikes around the base, and bought his bike at the PX, or post exchange, where soldiers can buy many different items like food and commodities. He said the bike helps him get places faster than walking, because he lives about a 15-minute walk from his office.

As far as missing things from home, Athman misses visiting his family cabin near Alexandria that his large family shares. He has little time to himself at Camp Buehring, and likes when he’s able to work out or watch TV or a movie, which isn’t often.

He’s been in the Army for nine years and said it was a pretty simple reason that helped him finally decide to join.

He had always wanted to be a fighter pilot in his teen years and got bored completing his accounting degree at St. Cloud State University. He eventually did complete his degree in 2006 and started work at Ernst & Young, an accounting firm in the Twin Cities, in between working for the Army when needed and a deployment to Kosovo in 2008 as a platoon leader for the Alpha Company.

He said his college degree and business experience have helped him in his time in the Army because a lot of his work is computer-based and working on relationships.