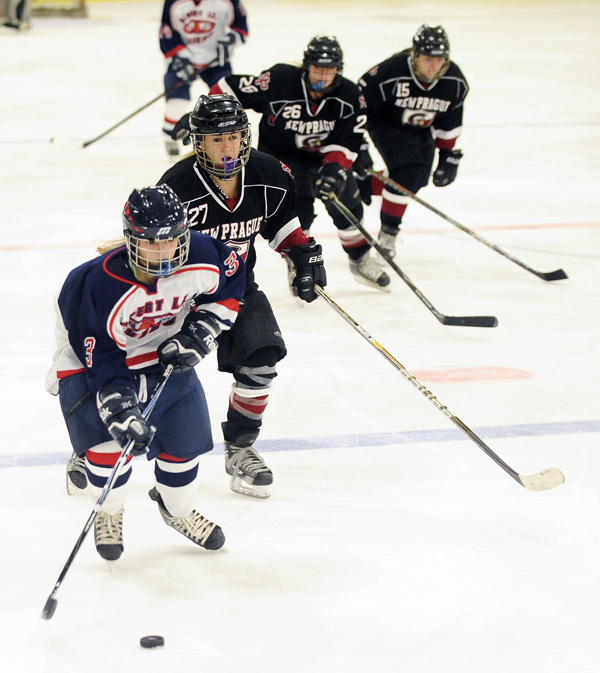 With a roster full of eighth- and ninth-graders, the Albert Lea girls’ hockey team opened its season Thursday night against New Prague at City Arena.

Freshman goalie Katie Schwarz saved 24 shots in her first career varsity start, but the Tigers’ offense couldn’t keep up with the Trojans in a 3-1 loss.

Anna Anderson scored the Tigers’ lone goal in the second, but the 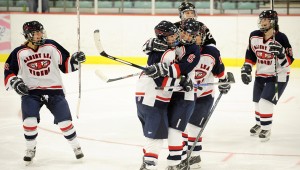 Trojans scored in each period and outshot Albert Lea 27-13.

“We definitely saw some effort,” Tigers coach Paul Willett said. “We made some adjustments the second half of the game, and the kids really came through and played hard and adapted to those adjustments.

“We’ve got a lot of kids playing their first meaningful varsity shifts, and we were a little timid, a little scared at times and we just need to continue to improve on those things.”

With seven eighth- and ninth-graders on the 15-girl roster, the Tigers were outshot 12-3 in the first period. New Prague’s Kasey Marquardt scored the team’s first goal nine minutes and 53 seconds before the first intermission.

Despite being under heavy fire in the opening minutes, Schwarz saved 11 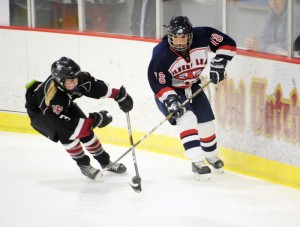 of 12 shots in the first and had an 88 percent save percentage for the game.

“She played very well,” said Willett who’s fresh into his second season with the team. “Katie hasn’t had a lot of experience. She’s young and she’s very raw. But she’s improved a ton in practice so far this year and for use to be competitive she’s going to have to continue to play like she did tonight.”

After a slow start to the season, the Tigers turned up the pressure in the second period and outshot the Trojans 7-5. While both teams had chances, New Prague was the one to take advantage and built a 2-0 lead off a goal by Brittany Sticha with 12 minutes remaining.

“The speed of the game in the first period was overwhelming for a lot of our kids,” Willett said. “We got the first-period jitters out of the way, we adjusted our forecheck and really we just turned it up a notch.”

Albert Lea cut New Prague’s lead to 2-1 early in the third when Anderson bounced the puck off the right post and passed goalie Sophie Puente. Natasha Moyer earned the assist on the goal, but the Trojans scored a short-handed goal just over 10 minutes later for a 3-1 final.

A bright spot for the Tigers was its penalty kill. The team killed all six of the Trojans’ power plays as Megan Pulley was in the box four times and Anderson twice. Albert Lea was 0-for-3 on power plays.

Willett said the Tigers are “way ahead” of where they were last year at the start of the season when it began 0-3 in its new system before winning six of its next seven games.

“The biggest thing for us right now is to get into hockey shape and for our young kids to get up to speed,” Willett said. “Once we do that we’re going to be very competitive and once again very tough to beat.”

The Tigers (0-1) play again at 2 p.m. Saturday against 20th-ranked Northfield at City Arena.