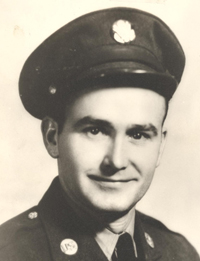 Lloyd was a graduate of Albert Lea High School and after graduation entered the United States Army Air Corps where he served as a Master Sgt. He was united in marriage to Jean Sinclair the day after the invasion of Pearl Harbor. Together they made their home in Freeborn County where Lloyd owned and operated the Hayward Hardware Store. Lloyd also enjoyed farming the land they purchased in Hayward.

Lloyd had been a member of the Hayward Lutheran Church, the V.F.W. and the Moose Club. In his free time he enjoyed the family farm and dancing with his wife Jean.

Lloyd is survived by his wife, Jean, of Hayward; children: Steven and his wife, Rebecca Alm, of Minneapolis, and Helen and her husband, Gordon Sundara, of Mill Valley, Calif. There are two grandchildren: Lucas (Jenney) Alm and Stephan (Sara) Alm; and two great-grandchildren: Nasen and Isobel. Several nieces and nephews also survive.

Lloyd was preceded in death by his parents and two brothers: Charles and Kenneth.

Memorials are preferred to the Salvation Army or the Hayward Lutheran Church.