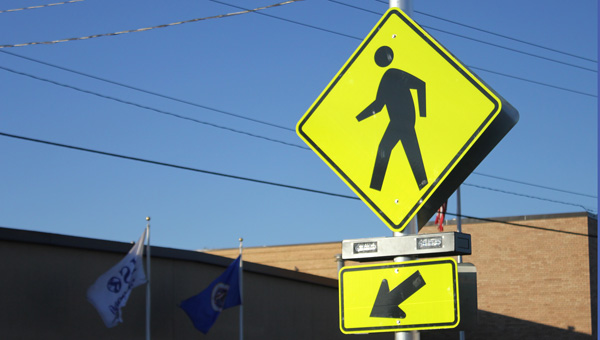 Lou-Rich employees installed a new pedestrian crossing sign last week. The sign has LED light bars that flash when someone steps or moves into the crosswalk. -- Danielle Boss/Albert Lea Tribune

Every day — sometimes multiple times a day — 82-year-old Roland Petersen drove his motorized scooter from his apartment at the Shady Oaks high-rise at Front Street and Fourth Avenue.

When he would venture east, he would cross from the south side of Front Street to the north at the pedestrian crossing in front of Lou-Rich Manufacturing. He often was on his way to a storage shed between Euclid Avenue and Pearl Street. Sometimes, he was headed downtown or to other places. 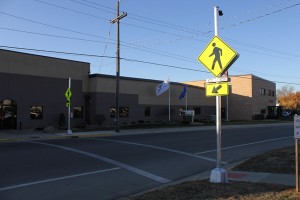 Lou-Rich employees installed a new pedestrian crossing sign last week. The sign has LED light bars that flash when someone steps or moves into the crosswalk.

That day, Petersen, in his scooter — clad with flags and reflectors — was headed to Arrow Printing along West Main Street to get an updated copy of the Vikings schedule.

But when he crossed the street in front of Lou-Rich — on the very same pedestrian crossing he would use daily — he was struck by a car.

He died later that day at a Rochester hospital.

“It was gut-wrenching to hear what happened,” said LaVerne Schroeder, safety and environmental coordinator for Innovance, Lou-Rich’s parent company.

Schroeder said he was on vacation the day of the crash but later received a phone call about it. Some of the employees heard the crash firsthand from the nearby parking lot and rushed over to help.

Now, 14 months later, Lou-Rich has taken extra efforts to prevent a similar incident from happening again. That’s the crosswalk many employees use every day to get from the front door to their rides.

Lou-Rich employees last week installed a new pedestrian crossing sign, outfitted with LED light bars that flash when someone steps or moves into the crosswalk.

“It brought my family to tears,” said Petersen’s daughter, Wanda Wangsness. “My dad would be so honored if he knew that because of his accident there has been a safety measure put in place by a loving company to make sure this never happens again.”

State law requires that automobile drivers stop once a pedestrian has entered a crosswalk or is waiting to cross. But in much of the Midwest, drivers are accustomed to pedestrians yielding the right of way despite what the law says.

Schroeder said last November he contacted the Albert Lea Police Department to ask what could be done to improve the safety at the intersection. With Petersen’s death and several other near-misses with their own employees, company leaders brainstormed what they could do to improve the scenario.

They found out about the new sign, outfitted with what are called “rectangular rapid flash bars,” and turned to the city engineer for getting it approved. He asked for the OK from the state to have it installed.

It’s the only one of its kind south of the Twin Cities.

Schroeder said the sign cost $9,447 plus installation. It has been wired in with the electricity at the company, but the city will be responsible for maintenance costs.

A sensor is triggered anytime someone walks or rides out onto the crosswalk, and then the lights flash for a predetermined number of seconds, he said. There is also a manual button to push in case the sensor is not working.

The lights can be seen two blocks away during the day.

Schroeder said he hopes the sign will keep everyone who uses the crosswalk safer — whether it’s customers, employers, vendors or community members.

“Would this have prevented that? I’m not sure, but is it part of why we did this, absolutely,” he said. “If we can do anything for the safety of anybody — it doesn’t have to be just our employees’ safety at work — we are going to go the extra mile and do what has to be done.”

“We are so overwhelmed and we’re so happy this is going to help others,” she said.