Lutefisk: Love it or Leave it? 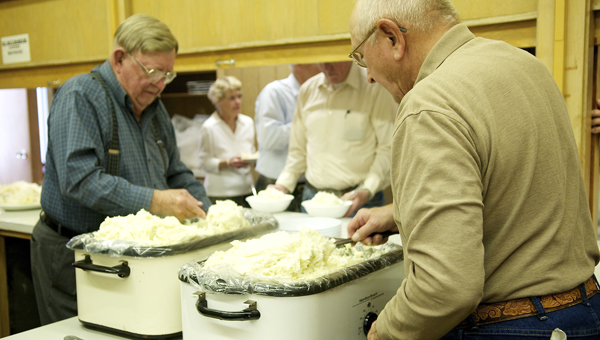 By Kara Buckner, for the Tribune

EMMONS — It’s the only referendum that wasn’t resolved during the election. Lutefisk: yea or nay? Last Tuesday, hundreds of votes were cast at the Emmons Lutheran Church 51st Lutefisk Supper. 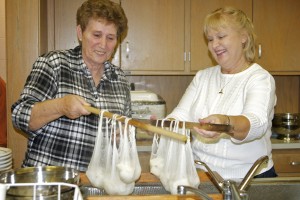 Known for its potent aroma, lutefisk is dried cod that’s been reconstituted with lye. Traditionally hung outdoors for months, today’s process has been accelerated by climate-controlled facilities. Major producers, like the Olsen Fish Co. in Minneapolis, are also using caustic soda (a more food-friendly agent) to rehydrate the fish.

Loyalists claim this has dramatically improved the flavor and texture. But not everyone agrees.

“Blech,” groaned Imogene Opdahl, whose first bite of lutefisk was also her last.

But it hasn’t kept her from participating in the annual church event. As a member of the organizing committee, she joined dozens of volunteers who doled out 750 pounds of lutefisk to 800 hungry souls.

Why are these youthful 80-somethings attracted to the funky-smelling fish? 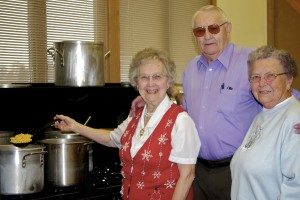 For Don Bartness and Elaine Johnson, this was merely one of eight or nine stops on their yearly lutefisk circuit. Johnson had eaten it her entire life, though not always by choice.

As a child, she wasn’t given many options.

“If you didn’t eat it, you’d go hungry,” Johnson said with a grin.

“Twenty years ago,” he said with a wink, “I ate TWICE as much as this.”

When friends and loved ones both appreciate “da lute,” all is right with the world. But that’s not always the case. Volunteer Paul Yost isn’t a fan, but his brothers turned his wife onto it. Now Debbie Yost is hooked, especially when it’s served with melted butter.

“It’s a delicacy,” she said. “We’d only eat it at Thanksgiving and Christmas.”

Yet her husband, Larry, is firmly in the no camp, even though he’s been cooking lutefisk at the church dinner for years. Time hasn’t swayed his opinion, but the ongoing exposure is concerning.

“I’m almost a permanent fish,” he claimed jokingly. “Have I got gills?”

With no real end in sight, it appears the debate rages on. But the polls will undoubtedly be packed again when Emmons Lutheran opens its doors on Election Day 2012.