AUSTIN — An Austin man who stabbed 37-year-old Dean Thordor in July verbally erupted in his sentencing hearing Thursday, saying he was set up and used as a pawn.

“It may not make much sense, but I was manipulated,” 23-year-old Isaiah Kalub Newberry said at the hearing. “I was set up. I was a pawn. You keep thinking I’m crazy, but I’m not.” 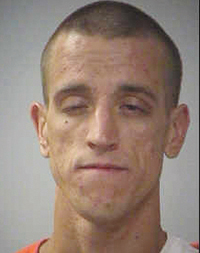 Newberry, who was surrounded by at least four deputies during his outburst, was sentenced to more than 11 years in prison for a first-degree assault conviction. According to court documents, he stabbed Thordor repeatedly the night of July 14. Charges of attempted, premeditated first-degree murder and attempted second-degree murder were dismissed in September.

According to Assistant Mower County Attorney Jeremy Clinefelter, the count of attempted, premeditated murder was dismissed because evidence for premeditation was nonexistent. The count of attempted second-degree murder was dismissed because the prosecution questioned Newberry’s self-defense claim due to Thordor’s reputation of violent crime convictions and a lack of credibility, Clinefelter said.

District Judge Fred Wellmann said Thursday that Thordor’s injuries would have killed him had medical intervention not happened when it did. The 135-month prison sentence was influenced by the extent of Thordor’s injuries. First-degree assault generally carries a prison sentence between 74 and 103 months, according to Minnesota sentencing guidelines, but Wellmann aggravated the sentence to account for the severity of the incident.

During his outburst in the hearing, Newberry said he is sorry and wishes the stabbing had happened to him.

“I’m sorry that it happened, that’s for damn sure,” Newberry said. “Wish it would have been me. There’s not saying it won’t be.

“They used me as a pawn. They know I didn’t do nothing wrong except smoke weed.”

Newberry never specified who he was referring to as “they.”

According to a court complaint, the stabbing happened near the bridge on 43rd St. NW. Witnesses told police Thordor and Newberry walked out of sight behind Newberry’s truck and seconds later Thordor began yelling that he had been stabbed. Newberry reportedly fled the scene on foot, leaving his truck behind.

Witnesses then brought Thordor to the Target parking lot and called police, according to court documents. Thordor was reportedly bleeding extensively from stab wounds in his stomach area.

He “appears to be in a condition that he’ll never fully recover from the wounds to his abdomen,” Wellmann said.

Thordor has undergone multiple operations since the stabbing, including a skin graft operation. He will require future surgeries, as well, according to Wellmann.

Newberry may have the opportunity to be released from prison after 91 months for good behavior. If that happens, he will be on supervised release for 45 months. If he violates his release conditions he will be taken back to prison to complete the remainder of his sentence.