Martin John George Obermeyer, 89, of Walters, died Sunday, Nov. 27, 2011, at Parkview Care Center in Wells. Funeral services will be held at 11 a.m. Friday at the United Lutheran Church in Walters. Visitation will be from 5 to 8 p.m. Thursday at Bruss-Heitner Funeral Home in Wells, and will continue one hour prior to the service at the church on Friday. The Rev. Donald Rose will officiate and burial will take place in United Lutheran Cemetery, rural Walters, Faribault County. Bruss-Heitner Funeral Home in Wells is in charge of arrangements. 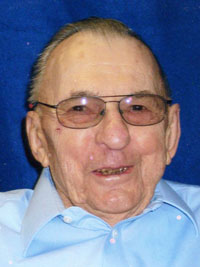 Martin was born April 2, 1922, in Kiester Township, Faribault County, the son of Henry J. and Eda M. (Martin) Obermeyer. He was baptized April 16, 1922, at St. John’s Lutheran Church, west of Walters by the Rev. Pirner and confirmed May 3, 1936, a Jubilee Sunday, by the Rev. Schreitmueller. On Aug. 29, 1948, he was united in marriage to the love of his life, Mattie H. Ladwig, at Trinity Lutheran Church in Albert Lea.

Martin farmed his whole life, and upon retiring, continued working by combining for his sons in their farming operation. He enjoyed growing, eating, picking and giving away apples, strawberries and other produce. He was a devoted, lifetime member of St. John Lutheran Church, and later United Lutheran Church in Walters, of which he served in many capacities; His faith and church family were always very important to him. He drove motorhomes for Winnebago Industries, from Forest City, Iowa, to destinations all over the United States. He loved traveling, playing cards and bird watching. Martin could initiate conversations with people of all ages. He was active in the community and volunteered on various boards throughout the years. He enjoyed working at Farming of Yesteryear, fishing and bowling. He especially enjoyed his children, and loved attending his grandchildren’s and great-grandchildren’s activities.

He was preceded in death by his parents; brother, Palmer; and son-in-law, David Mutschler.