Medium Biz of the Year 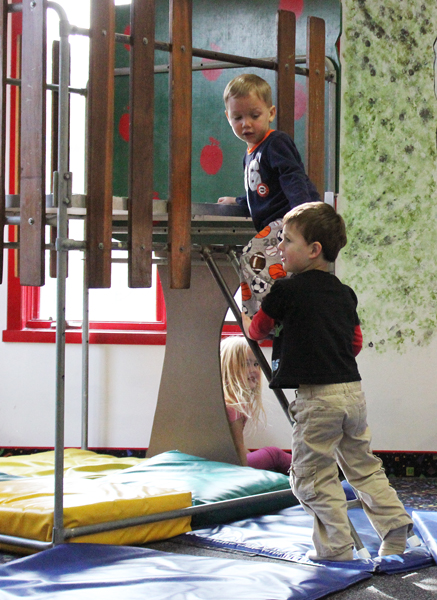 Isaiah Andersen, above, and Axel Calderon, play in the gym at The Children’s Center Friday. -- Kelli Lageson/Albert Lea Tribune

It’s a preschool, not merely a child care center. 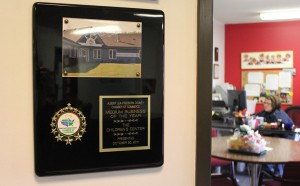 A plaque for Medium Business of the Year hangs outside Director Kim Nelson’s office at The Children’s Center. -- Kelli Lageson/Albert Lea Tribune

The Children’s Center Director Kim Nelson said she was surprised to learn it was nominated since it’s a nonprofit organization.

“Typically this is not viewed as a viable business,” Nelson said.

She said she and her staff appreciated being named one of the businesses of the year, and that they’ve worked to be more involved in the community.

“We’ve been a presence in the community,” Nelson said.

She said that she and other staffers are involved in various organizations, including the chamber. Involvement helps people know more about the child care center. Nelson said often in other places businesses and people don’t know about child care centers and preschools unless they’re looking for one.

“We’ve been intentional about being part of the community,” Nelson said. 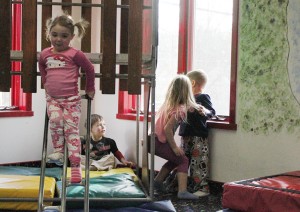 Gracie Clotfelter climbs down the steps, as Axel Calderon, Roxanne Tollefson and Isaiah Andersen play in the background. Friday was a special day at The Children’s Center — Pajama Day.

She credits her administration, co-workers, board members and parents of children for being advocates of The Children’s Center.

Nelson said the preschool is working to align itself with the Albert Lea School District and to make sure children are prepared to go to kindergarten. The preschool has started doing developmental screening, which the school district requires of every child anyway. Nelson said they’re trying to set children and parents both up for success by preparing them for things they’ll run into in elementary school.

“This isn’t babysitting,” Nelson said. “We’re in the business of learning.”

Teacher Kathy Dyrdal said children pick up new things quickly and are interested in learning. On Friday her class had some play time in the gym and were celebrating a special day — Pajama Day.

“They’re so eager to learn,” Dyrdal said. “They have so much to say.”

Nelson said she was surprised and pleased at the chamber’s annual banquet when The Children’s Center was recognized as Medium Business of the Year. She said being recognized by a group of peers meant a lot.

Chamber Executive Director Randy Kehr said The Children’s Center is active in the chamber, with Nelson serving as an Ambassador and a member of the Business Education Committee. There also three employees who have graduated from the Leadership program, with a fourth participating this year.

“Obviously they’re very supportive of other businesses, but they are also a great example of how Albert Lea, when it recognizes a challenge, we are capable of finding our own solution,” Kehr said.

The nonprofit began 41 years ago and last July became as a tobacco-free campus. The Children’s Center employs 35 people and is at 605 James Ave., across from the city pool.