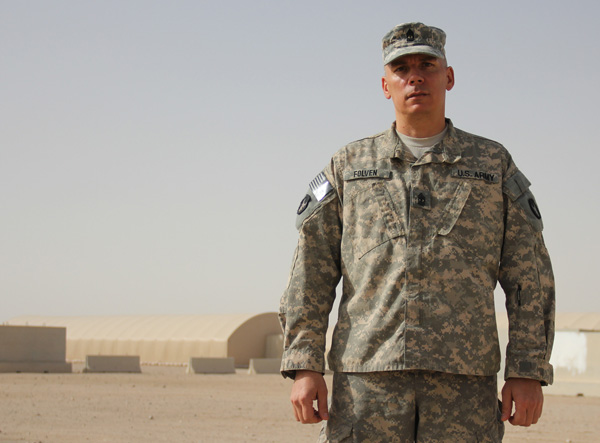 First Sgt. Ray Folven, of Emmons, poses for a photo at Camp Buehring in Kuwait. He first joined Delta Company in 1985 and now is part of Headquarters Company. -- Kelli Lageson/Albert Lea Tribune

CAMP BUEHRING, Kuwait — An Emmons resident is on his third deployment, all of which have been in the last 10 years, with the National Guard.

First Sgt. Ray Folven, 43, joined Delta Company in 1985, when he and his friend bet each other $20 to join the Guard. He wasn’t deployed until 2001, when he was deployed to Saudi Arabia. Then it was on to Afghanistan in 2004-05. Finally in 2008, he left Delta Company after 23 years for the Headquarters Company of the same battalion, 2nd Battalion, 135th Infantry.

“There’s been more responsibilities with each deployment,” Folven said.

With Delta Company he advanced from private to sergeant first class. He’s now a first sergeant, which is one of just a few senior enlisted personnel. He works closely with Capt. Chris Andersen, commander of Headquarters Company, who said Folven is looked up to by all other soldiers.

“He cares,” Andersen said. “It’s his heart — he always does the right thing.”

With his current job of supervising training and other aspects of the deployment, he doesn’t get a lot of time off. When he does, he likes to talk to his children Samantha, 20, Jonathan, 15, and Nathanial, 13. They taught him to use Skype, the free video-calling service, so they can keep in touch.

Back home, he’s the non-commissioned officer in charge of readiness at the Mankato Armory full-time and he lives in Emmons. He plans on staying with the Guard, he’s been active duty for 11 years and has nine more to go before he can retire out. One of his favorite parts of his job is helping new soldiers and watching their progress.

“I want soldiers to succeed and get the most out of the military they can,” Folven said.

In his little spare time on the base, he likes to be as active as possible. Organized runs are scheduled at 6 a.m. each Wednesday and for special holidays. He likes to join those 5-kilometer runs and visit the gym in the evening.

Back in Minnesota he enjoys camping and fishing for walleye. While he does fish at some of the lakes in Freeborn and Mower counties, he enjoyed a trip to Canada last year.

He misses being able to watch the Minnesota Vikings and said he’s been a fan so long he can’t give up on them now. He reads the Albert Lea Tribune online when he can to keep up with local news, too.

Andersen said that as a commander he hopes and fears his first sergeant will be a soldier that other soldiers respect and admire.

“He lives up to all those expectations,” Andersen said.