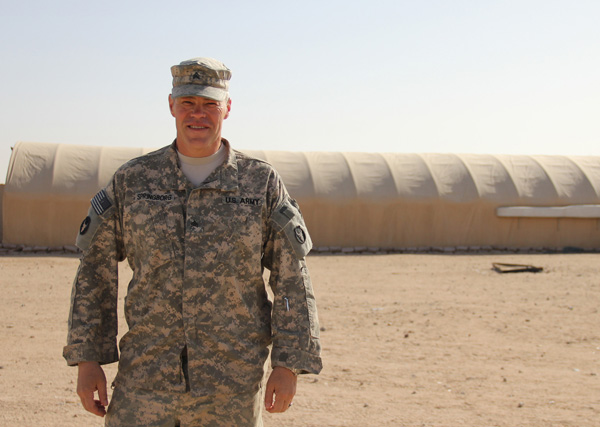 Sgt. Dan Springborg, of Albert Lea, poses for a photo at Camp Buehring in Kuwait. Springborg has been in the National Guard for five years. -- Kelli Lageson/Albert Lea Tribune

CAMP BUEHRING, Kuwait — An Albert Lea man in Delta Company is on his second deployment in his five years in the National Guard.

Sgt. Dan Springborg, 45, has also been deployed to Kosovo in 2007-08, and said he’s enjoyed seeing other places like when they had training in Norway and did border patrol in New Mexico. He said one of the reasons he joined the Guard was that a friend had been deployed, was injured on the deployment and stayed in. The friend also informed Springborg that the age limit had been raised.

“I’d always wanted to join,” Springborg said. “I like it — there’s a lot of structure.”

He enjoys the time he gets to hang out with other soldiers but said he really misses his wife, children and grandchildren. He’s married to Gail, and together they have five children, Brittany, Courtney, Jake, Drew and Jordan. Drew also has a 2-year-old son, Hunter, and Courtney recently had Macie. Springborg is excited to meet Macie.

“I can’t wait to get home and hold her,” Springborg said.

He’s seen her over a webcam, which is one of the ways he communicates with his family. He also likes to email and write letters, which he thinks is more personal than emails. One of his daughters set him up with a Facebook account, so he can see photos and communicate with them that way. He said he plans to delete the account when he gets home.

Other than missing family and friends, he said he missed seeing the fall colors and changing of the seasons. Here in Kuwait he’s a team leader and truck commander. He started out in the Delta Company, was transferred to a scout unit then attached back to Delta Company. As a truck commander, he takes orders and gives them out to other soldiers.

“I make sure of the safety of the guys in the truck,” Springborg said.

That can include checking maintenance before missions, making sure soldiers are wearing helmets and seatbelts and drivers are driving responsibly. If they’re tired on a long mission, Springborg helps keep them awake.

In his free time on the base he enjoys going to the gym, talking with family back home and sometimes playing cribbage, because he’s not into video games.

Back home he works at the Freeborn County Jail, as a jailor, and often goes on motorcycle trips with his wife and friends. He has a 2008 Road King and a 1979 Shovelhead, both Harley-Davidsons.

“We have a couple of good friends we go on weekend trips with,” Springborg said.

He enjoys anything outdoors, and said his favorite places to camp are along the North Shore or near Black Hill, S.D. He hopes to camp in Grand Marais over his leave.