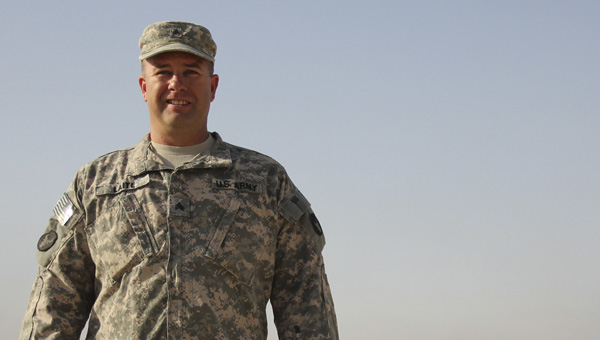 When he first joined in 1986 he and his friends joined together and called it the “buddy platoon.” After transferring to a St. Paul personal service battalion for three years and a nine-year break, Sgt. Ken Laite, 43, joined back up in 2007.

Laite has worked at Albert Lea Auto Salvage since 1998, but has been busy full time with the Guard for about 2 1/2 years.

“They were kind enough to let me leave on short notice,” Laite said.

His first deployment was to Kosovo in 2007-08, right after he rejoined the Guard. Before this deployment to Kuwait he was working full time at Albert Lea’s Armory to help prepare for the deployment overseas. He likes many different things about being in the Guard.

“I like the fun and challenges,” Laite said. “I’ve been in more places in the last five years than any other time.”

He works in communications for the Delta Company and had to have special training for all the devices he would have to know how to operate and fix. He learned about various laptops, radios, specialty tools and a lot of the different systems in humvees to prepare for the work he’s doing now.

“The job is challenging,” Laite said.

In his spare time on the base he likes to go to as many MWR, or Morale, Welfare and Recreation, events as possible. He recently saw the Minnesota Vikings cheerleaders, and was one of a few soldiers from Minnesota who go to tape an introduction to a player from the Vikings’ lineup that will be shown before the Nov. 20 home game against the Oakland Raiders.

He also enjoys finding time to Skype (video call over the Internet) or email with his family including wife, Stacie, and children Casey, 23, Aaron, 19, Caitlyn, 14, Bryanna, 13 and Derrek, 6, and a granddaughter, Ava, who’s 2. Another part of the deployment he enjoys is the time to be able to work on himself and achieve some personal goals like weight loss.

He goes to the gym on base when he can and also participates in the weekly 5k runs on Wednesdays at 6 a.m. There’s also extra 5k runs on most holidays where soldiers can get a free T-shirt for competing.

At home he enjoys riding his 2001 Harley-Davidson Road King and playing softball and volleyball with various leagues. He’s also coached hockey before when his oldest son was in it, and expects to coach again now that his youngest son is starting hockey.