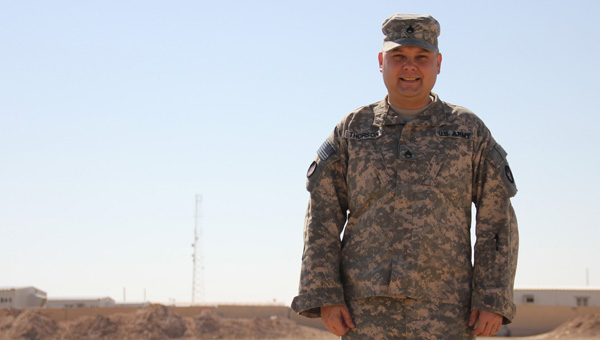 Staff Sgt. Travis Thorson poses for a photo at Camp Buehring in Kuwait. Thorson has been in the Army for almost 23 years. -- Kelli Lageson/Albert Lea Tribune

CAMP BUEHRING, Kuwait — A Lake Mills, Iowa, soldier who just turned 40 has been through many major events in all the deployments in his military career.

Staff Sgt. Travis Thorson first joined the Army early in 1989 and was inspired to join by uncles and grandfathers who had been in the military. He joined the National Guard in Mason City, Iowa, and was deployed as part of the Persian Gulf War in the early 1990s to Saudi Arabia and Kuwait. He remembers first going to Kuwait, only 19 then, and seeing huge craters in the roads.

“We saw the aftermath,” Thorson said. “Everything was blown up.”

In 1993, Thorson joined Albert Lea’s Delta Company because his cousin was in the unit and had encouraged him. In 2004-05 Thorson was deployed with the Delta Company to Afghanistan, and he was there during the country’s first-ever democratic election. While deployed in Kosovo from 2007-08, he was there when the county declared independence from Serbia.

“Every tour I’ve done has been during a major mark in history,” Thorson said.

After the deployment to Kosovo, Thorson switched units to get a promotion and was in New Ulm for a year, before the 2nd Battalion, 135th Infantry Division asked him to come back for this deployment to Kuwait. Now he’s with the Headquarters Company.

“There was a lot of stuff between the deployment, too,” Thorson said.

He remembers a three-week trip to Germany, three weeks doing border patrol in New Mexico and being activated for a tornado in Glenville in 2001.

“This’ll be my last tour,” Thorson said. “I’m planning on retiring, but I’ve said that before, too.”

In February he’ll mark 23 years in the Army, and he’s eligible to retire after 20 years. He said he’s stuck with the Army for the employment and for the camaraderie with the other soldiers.

“There’s a handful of guys who have been in since I’ve been in,” Thorson said. “The rest is just rotating out new faces and old faces coming back.”

In Kuwait he works at the communication shop for the battalion, where he said anything that sends or receives signal gets worked on. They do it all, computers, radios, cell phones and more.

He said since he’s been in Kuwait the mission keeps changing, which means he’s busy most of the time. In his little free time he communicates with family via webcam or instant messaging online. His wife, Katherine, lives in Lake Mills, his parents Don and Kathie Thorson live in Forest City, Iowa, and he has sons Hunter, Kael and Blaine, and step-son Kevin Koell. He just got back from his two-week leave, but said he does miss his family while he’s over here.

“I relaxed and spent time with my wife and kids,” Thorson said.

Thorson worked at Winnebago Industries for 16 years before being laid off, and that’s one of the reasons he’s stayed in the Army was that he couldn’t find other employment.

“I have to find a job when I get home,” Thorson said. “They’re putting programs together to help us find jobs.”

Thorson said he’s heard of resume-building classes and other career-building seminars that are available at the base. He said he’s enjoyed his time in the Army, and even though there may be historical moments in future deployments, he’s OK if he’s not a part of them.

“It’s time to pass that torch onto someone else,” Thorson said.