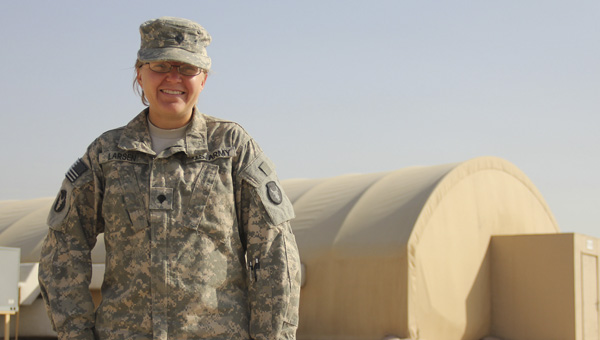 Spc. Amanda Larsen, 22, is originally from Rochester but has lived in Winona while at Winona State University and also in Mankato with family. She joined the National Guard in 2007 and has been with the Austin unit ever since.

“I joined because I came from a military background,” Larsen said.

Her dad and grandfathers had been in the military and she said she also liked the education benefits the Guard was offering. She’s got one year of schooling left at WSU, and then hopes to go to law school at the University of Minnesota. She’d always thought about law school, but an internship helped her realize it was the right career for her.

“I had an internship with the Blue Earth County attorney,” Larsen said. “It was one of the best experiences of my life.”

She said it’s her passion and researching real cases and helping to make a difference in people’s lives was exciting. Usually her job in the Guard is to be a driver, but here in Kuwait she is the assistant of Staff Sgt. Raymond Tolman, the platoon sergeant.

“It’s extremely busy,” Larsen said. “We have a long to-do list every day.”

She said that even though some days they only get to the most important tasks that she almost always goes home feeling like they did a job well done.

In her spare time on the base she likes to sing karaoke on Thursday nights and go to the gym to get into better shape. She’s also planning on studying for the law school exam, the LSAT.

“I try to talk to my family as much as possible,” Larsen said.

She uses Skype, a video-calling service, to talk with her mom, Lisa, who lives in Rochester. She also emails and talks to her grandparents Mike and Alice Jensen, who live in Mankato. She sends letters to other family members.

“I talk to my friends a lot too, which makes being here a little easier,” Larsen said.

One of the hardest parts about being deployed for her is when she’s not able to help family or friends with problems from afar. She said she signed up for the Guard and doesn’t have complaints about the deployment, other than missing family and friends.

Back home she enjoys doing anything outdoors and said she likes to bike on trails in the Mankato area and hike in Winona. She misses hunting and fishing a lot.