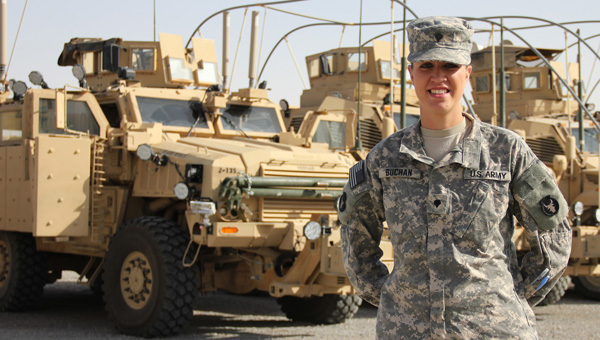 CAMP BUEHRING, Kuwait — An Austin resident has been enjoying her time in the National Guard and the benefits it provides for her family, but her family may also be the reason she leaves.

Spc. Brianna Buchan, 23, works as a food service specialist for Austin’s 1135th Combat Support Company, part of the 2nd Battalion, 135th Infantry Regiment. She misses her 16-month-old daughter, Jaylynn, and is considering not re-enlisting even though she enjoys the Guard.

“We’ll see how the rest of the deployment goes,” Buchan said.

She said she’d like to possibly stay in for the 20 years needed before retirement, but she’ll have to decide in January when she’s due to re-enlist or leave. Previously Buchan was deployed to Kosovo in 2007-08 and said the missions are quite different.

“Now that I have my daughter it makes it more difficult,” Buchan said. “I’m used to the training so it doesn’t bother me.”

One thing that does make the deployment a little easier is that her boyfriend, Travis Dahmen, is deployed to Kuwait, too. She mostly communicates with her family back home using Skype, a free video-calling service.

The 2006 Austin High School grad communicates with mom, Darci Buchan, dad and step-mon, Craig and Leslie Johnson, and her two little brothers Jack and Cole. She originally joined the Guard in January of 2006 with her best friend.

“We did a buddy-buddy thing,” Buchan said.

Having her friend with her made basic training at Fort Jackson in South Carolina much easier than doing it alone. She then went to AIT, or Advanced Individual Training, at Fort Virginia, where she learned the cooking trade.

During drill weekends, which are once a month when soldiers aren’t deployed, she’s one of the people in charge of feeding the other soldiers. She wakes up at 2 a.m. to start getting breakfast ready, soldiers eat MREs, or Meals Ready to Eat, for lunch, and then she helps prepare a dinner.

“We cook everything in bulk,” Buchan said.

When she’s not on base she spends as much time with her daughter as she can, and is excited to be saving money to be able to better take care of her daughter when she gets home. She said military life is something you get used to, and she doesn’t know how she’d handle not being in the military.

“I wouldn’t know what to do out of the military,” Buchan said.