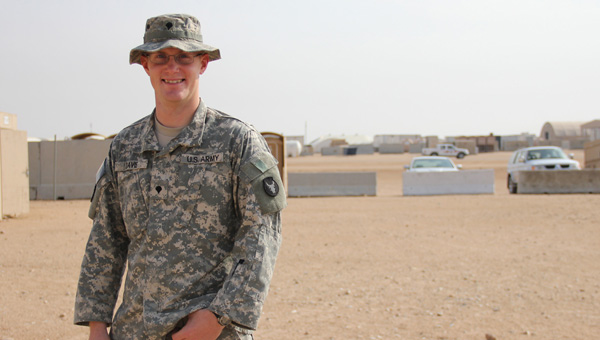 Spc. Kyle Davis poses for a photo in Camp Buehring. Davis is from Albert Lea and lives in Austin with his fiancee. -- Kelli Lageson/Albert Lea Tribune

CAMP BUEHRING, Kuwait — With changing missions, one specialist has been experiencing many different tasks during his deployment.

Spc. Kyle Davis is originally from Albert Lea. He’s been in the Minnesota National Guard since June of 2009, and is deployed with Albert Lea’s unit — Delta Company, 2nd Battalion, 135th Infantry Regiment, within the 34th “Red Bull” Division. Davis is a machine gunner, and as missions change he’s been doing various duties. One was ARF, or Area Reaction Force.

“We basically drove around Kuwait for presence patrol,” Davis said. “On our first mission we met policemen and visited the police station.”

He also enjoyed meeting members of the Kuwaiti army and seeing their Russian weapons and how different they were from weapons used by the United States military. Because of changing missions, Davis said he attended some follow-up training when he first got to Kuwait, even though he had just trained at Fort McCoy, Wis.

In his spare time he likes to go to the gym, watch movies, play video games and visit restaurants on the base once in a while.

He said he usually visits Taco Bell or the Great Steak & Potato Co. He also likes to communicate with family back home, which includes his fiancee, Krystle Kuchera, who he lives with in Austin and proposed to during his four-day pass between training at Fort McCoy and the deployment to Kuwait. He uses a MagicJack, which plugs into his computer’s USB port and connects to any landline phone. He then makes calls over the Internet. Some soldiers use Skype, a free video calling service, but not all do.

He’s helped plan the wedding from afar and said most of the major details are already planned for their wedding that will be Sept. 22, 2012. He said Kuchera is the one for him because they get along and enjoy the same activities, like riding his 2000 Harley-Davidson Sportster 1200.

“She puts up with me,” Davis said with a laugh.

Davis said his family, including dad Layne, step-mom Carol and sister Kristin Wolff, all of Albert Lea, is excited about the engagement.

“She fits in really well with my family,” Davis said.

Davis just got off his two-week leave, which he spent in Albert Lea and Austin. His dad held a family get-together for him, and he and Kuchera got their engagement photos taken by Kuchera’s mom, Jody Newman, around Austin, Albert Lea and Freeborn.

“We went to the Nature Center in Austin and Arrowhead Park in Freeborn,” Davis said.

Davis also said he saw family and had plenty of time to relax. He also planned to get work done on his truck so it will be ready when he gets home.

While it wasn’t easy to go home and to come back to Kuwait, he understands that he has to be in Kuwait helping with the mission. He said there were a lot of reasons he wanted to join the Army in the first place.