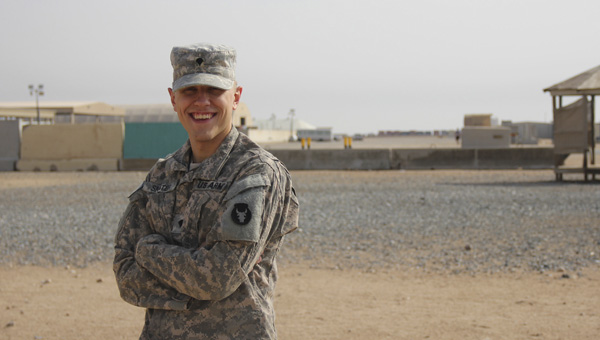 Spc. Noah Snater poses for a photo at Camp Buehring in Kuwait. Snater is in Delta Company and lives in Austin with his wife, Kasey. -- Kelli Lageson/Albert Lea Tribune

CAMP BUEHRING, Kuwait — A medic from Austin is learning more and more each day while stationed in Kuwait as part of Albert Lea’s Delta Company.

Spc. Noah Snater, 23, has been in the Minnesota National Guard since February of 2007. He joined Albert Lea’s unit — Delta Company, 2nd Battalion, 135th Infantry Regiment, within the 34th “Red Bull” Division — about a year and a half ago.

In Kuwait, he works at the BAS or Battalion Aid Station with other medics, doctors, physician assistants and other medical personnel.

The people with more medical knowledge have been teaching medics like Snater more about injuries and other things they have to deal with. Snater said Delta Company hasn’t had any cases of dehydration, and prevention of dehydration was instilled in them at Fort McCoy, Wis., where they trained.

“I haven’t seen any serious injuries,” Snater said. “We do a lot of cutting minor wounds open to drain them and cutting out toenails.”

The BAS at Camp Buehring is well-equipped, according to Snater, but does not have an X-ray machine. For soldiers who need those, medics take them to nearby Camp Arifjan. Camp Arifjan can also handle emergency surgeries when it’s not possible to get soldiers to Germany, Snater said.

“I watched 52 in the first month,” Snater said.

Other than that he likes to work out in his spare time.

“They have a really nice gym here,” Snater said. “It’s the biggest tent on base.”

Earler this year in preparation for the deployment, Snater and other soldiers in Delta Company went to Camp Ripley for the Soldier Readiness Program, which is some training and makes sure soldiers are up to date with shots and are otherwise healthy. Then they headed to Fort McCoy at the end of May, where they did training for their mission of safely escorting troops and equipment from Iraq.

In July, before leaving for Kuwait, soldiers had a four-day pass. Snater said he went home to see his wife, Kasey, who’s 24. After the deployment he said he plans to attend school to be a paramedic at either Riverland Community College or Rochester Community Technical College. He worked at Carney Auto and Perkins in Austin before the deployment.

He and his wife like to visit family in the Twin Cities in their spare time, watch movies and walk their two dogs. They also have a cat, Peaches. Snater said he also enjoys visiting shooting ranges in his spare time.

“I do a lot of shooting at Cedar Valley Conservation Club in Austin,” Snater said.

The recent rain has made him miss home because it reminds him more of the weather back in Minnesota. He communicates with his wife through calling most times, because coordinating a time to be on Skype, a free video-calling service, can be difficult with the nine-hour time difference. He does get letters from his wife and other family members.

“My little sister writes the most,” Snater said.

That sister is Sabrina, and he has two other sisters Abby and Sari; he has two older brothers Aaron and Sam and a half-brother Ian. He said he also misses his in-laws Mike and Ann Langstaff and their children Michelle and Michael Jr, who he’s close to.

He doesn’t know exactly when his two-week leave will be, but he didn’t request it to be around the holidays because he knows other soldiers have children who they want to see. He enjoys being in the Army and predicts he’ll re-enlist in the future.

“Being in the military is a really good break from normal life,” Snater said.

He said that while he does miss his wife and family, the time apart helps them enjoy their time together more.