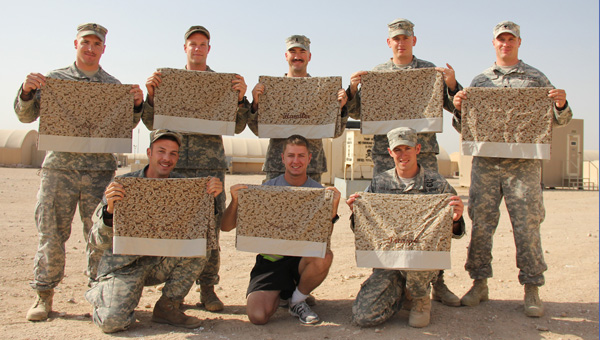 CAMP BUEHRING, Kuwait — The mom of a soldier has again sent handmade and embroidered pillowcases to her son and some of his friends who are deployed.

Lori Nelson, of Alden, is the mom of Sgt. Trevor Nelson. His last deployment to Iraq was with Charlie Company, and Lori just happened to find some camouflage fabric while shopping one day and decided to make it into pillowcases. 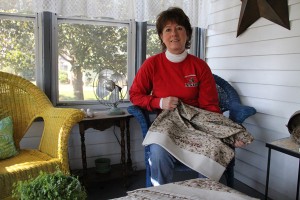 Lori Nelson, mother of Sgt. Trevor Nelson, sewed pillowcases and had them embroidered with nicknames for Trevor and his friends who are deployed in Kuwait.

For this deployment to Kuwait, Lori found a different color camouflage and had nicknames embroidered for the soldiers.

“I wanted something that would be personal,” Lori said. “Having it embroidered makes it even more special.”

Trevor is a senior sniper team leader. He asked the snipers what names they’d like on their pillowcases. Every soldier seems to have a nickname, so they went with those. Trevor’s nickname is Treasure, Staff Sgt. Dustin Eggum’s nickname is Da Egg and there are others including Fargo Kid and The Element.

“It’s amazing,” Eggum said. “I like the different pattern.”

“Trevor’s mom rocks,” Anderson said. “This is my second pillowcase; I still use my first one.”

Lori said it can be hard to find things to send to soldiers because they have access to food, snacks and some other luxuries being on a base the size of Camp Buehring.