Newcomer to Austin sent over to Kuwait 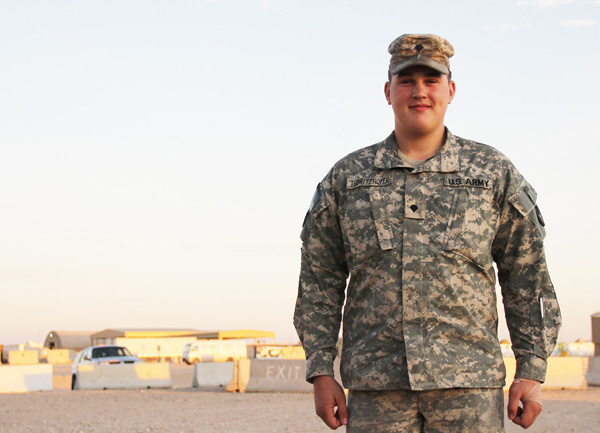 CAMP BUEHRING, Kuwait — A soldier in Austin’s 1135th Combat Support Company has been enjoying his time in the National Guard since he joined in 2008.

Spc. Daniel Tobritzhofer, 20, of Hastings, originally went to Vessey Leadership Academy in West St. Paul. He lived in Austin for three weeks before coming to Kuwait, and said he liked the small town atmosphere.

“It’s a good community,” Tobritzhofer said. “Everyone was friendly.”

This is his first deployment, and he works with communications systems and as a driver. He’s only been out on one mission so far and also works in the company’s office. He likes the other soldiers he works with.

“I get to see friendly faces,” Tobritzhofer said.

During his spare time on the base he plays football weekly and tries to get to the special events put on by MWR, or Morale, Welfare and Recreation, when he’s not working. On Sunday he went to see the Minnesota Vikings cheerleaders, and he hopes to see country group Lonestar this Saturday night if he’s not working.

Tobritzhofer’s dad, Daniel, works in Burnsville and his step-mom is Jodi Robinson. He has three brothers including Aric, Josh and Mike. He tries to talk with his family a few times a week.

“Me and my dad email back and forth, too,” Tobritzhofer said. “I’ll be home over Thanksgiving so I’m looking forward to that.”

Back home Tobritzhofer works for Village Green Landscapes in St. Paul and works part-time for his family’s street cleaning business. He said he likes that neither of his jobs interfere with having to go to drill one weekend a month for the Guard.

When he’s not deployed or working he enjoys riding dirt bikes and snowmobiles and hanging out with friends. He also enjoys deer hunting, especially near Sandstone, which is north of Pine City.

“I go with my family,” Tobritzhofer said.

He said he hopes to stick with the Guard for the full 20 years before retirement and said he likes the other soldiers he works with.

“I love what I do,” Tobritzhofer said.