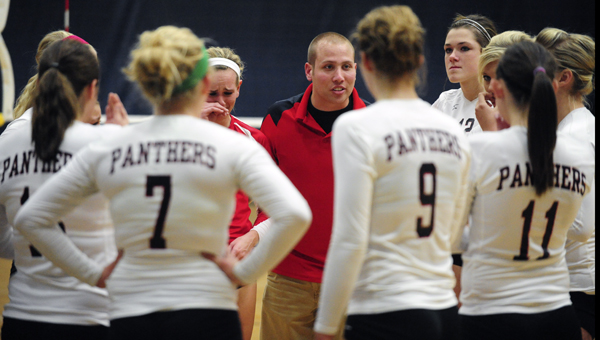 All of which helped kept the four games against Le Sueur-Henderson (22-8), ranked fifth in the state in Class AA, close at Gustavus Adolphus College.

Late game surges by the Giants helped secure victories in the first and fourth sets, eliminating the Panthers (23-7) from the section tournament.

“Against a great team, they are going to do a lot of things well and Le Sueur definitely did,” NRHEG head coach Joe Kuechenmeister said. “They put a lot of pressure on us.

“They don’t necessarily have that one go-to girl. Their girls are at a very high level all the way through.”

NRHEG jumped out to a 17-15 lead in the first set behind the play of senior Anna Schlaak and sophomore Carly Wagner. Even with a close game at hand it seemed as though the momentum had swung in the direction of the Panthers, taking four of the previous six points.

But then miscommunication and an onslaught of four service aces by Giants’ senior Gretta Schultz had NRHEG reeling. Le Sueur-Henderson went on a 10-1 run to finish out the set by a score of 25-18.

Game two didn’t work out much better for the Panthers. They never led in the game but showed signs of live towards the end of the 25-21 defeat.

Those signs translated into a full scale attack in the third game.

Wagner’s five kills and an ace block along with Schlaak’s four kills allowed the anthers to secure an early 15-8 lead and they never looked back, closing out the set with a 25-22 victory.

“I always tell the girls who are out there with me to just finish hard no matter what,” Schlaak said after the match.

Schlaak along with fellow senior Harlee Vokoun returned in the final set with a vengeance.

Everything looked to be going the Panthers’ way while holding a 23-20 point advantage on the Giants. However, Le Sueur-Henderson was able to score the set’s final five points, putting an end to the Panthers’ season.

“Overall I’m really proud of the way we fought and were able to put runs together, because the first time we played Le Sueur we weren’t able to do that,” Kuechenmeister said. “I thought overall we played just about as well as we possibly could.”

After one of the top seasons in NRHEG history, the Panthers’ will bid farewell to six seniors.

Schlaak, who owns the schools all-time career kills record, libero Tori Raimann, Amy Thompson, Vokoun, Stormy Mulder and Rachel Ledding were more than just teammates for some of the other players on the squad.

“These senior girls have been absolutely amazing,” Wagner said. “They take you in and treat you like family.

“They do so much for this team and teach you so much. We’re pretty much sisters.”

Le Sueur-Henderson advances to play in the section final on Saturday night against the Jordan Jaguars with a trip to the state tournament on the line.