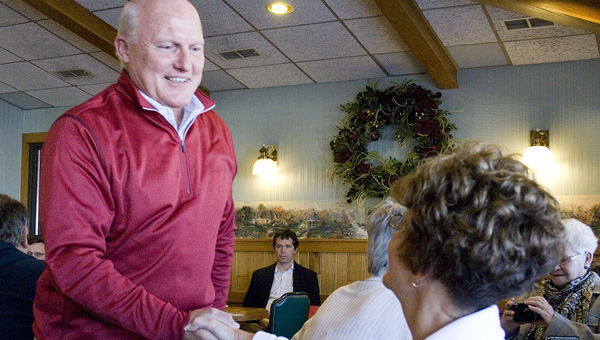 State Sen. Mike Parry, a Republican candidate for the 1st District Congressional seat, shakes hands with Penny Ladlie Thursday afternoon during a stop in Albert Lea. Parry was in the middle of a tour of the district. -- Sarah Stultz/Albert Lea Tribune

Touting himself as the person who can bring changes to the 1st Congressional District, state Sen. Mike Parry on Thursday formally kicked off his campaign for Congress.

With stops in five cities in the district, including one at The Trumble’s Restaurant in Albert Lea, Parry, R- Waseca, said he thinks Washington is broken and that jobs and the economy are not where they should be.

“I’ve been disappointed in what I see happening,” he said.

For this reason and others, he said, he decided to run for office.

He referenced incumbent Democratic House Rep. Tim Walz’s votes for Obamacare and cap and trade, which Parry argues were not in line with the values of the district.

He also talked about what he called a “spending crisis” going on in the country and said he thinks lawmakers cannot keep raising the debt limit. Every time the limit is raised, spending increases.

“We have uncontrolled spending,” he said. “Once we reign that in we’ll get our economy back.”

He noted he supports the Social Security program but noted that there may be other programs that need to be looked at.

He also said he supports the idea that everyone who lives in the country should pay taxes. By instilling this, along with controlled spending, the nation will be in a better place, he added.

In a statement released Thursday, state DFL Chairman Ken Martin described Parry as a “radical Tea Party politician who is so extreme that he shut down Minnesota’s government just because he couldn’t get his way.”

Martin said Parry is reckless with the economy and is out of touch with the values of southern Minnesota.

Parry, a small business owner, announced his campaign in October and said he plans to build a grass roots campaign in the months to come.

He also made visits to Winona, Rochester, Austin and Owatonna Thursday and was slated to visit New Ulm, Mankato, Fairmont and Worthington today.

Aside from talking about why he’s running, Parry talked some about his time growing up in Albert Lea. He said he was born and raised in Albert Lea and played on the football team that won the state championship in 1970.

He said he considers this to be his hometown.

Prior to his time in the Senate, Parry served on the Waseca City Council, the Waseca Economic Development Authority and Waseca Development Corporation, among other roles. He is a former police officer who also had time in the Army National Guard.

He currently serves as the chairman of the State Government Innovation and Veterans committee.