Platoon sergeant on his third deployment 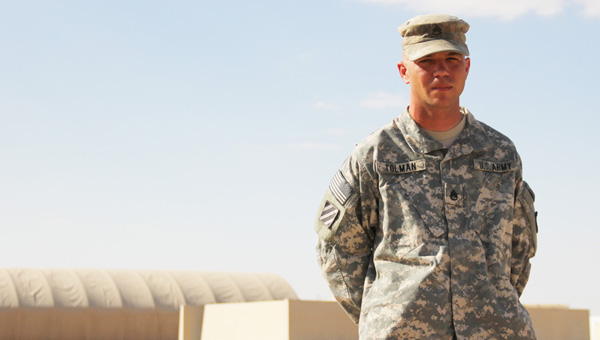 Staff Sgt. Raymond Tolman poses for a photo at Camp Buehring in Kuwait. Tolman has been in the Army for 13 years, and this is his third deployment. -- Kelli Lageson/Albert Lea Tribune

CAMP BUEHRING, Kuwait — An Austin man is working as the distribution platoon sergeant for the 1135th Combat Support Company, which means helping to organize, plan and execute missions.

Staff Sgt. Raymond Tolman, 34, lives in Austin with his wife, Joni, when he’s not deployed. He’s been in the Army for 13 years, and said that while he joined originally for money for college, the reason has changed.

“After 9/11 it was more about the soldiers standing next to you,” Tolman said.

He said when he enlisted in 2000, it was a much different National Guard. He was originally going to Riverland Community College pursuing a degree in law enforcement, but after this deployment to Kuwait he hopes to attend Rochester Community Technical College for building utilities and maintenance.

He said standing by other soldiers is the main reason he’s stayed in the Army so long, and now with 13 years in he will probably wait and retire out after 20 years. When he joined the Austin unit it went by a different name, and has changed names many times since. It’s soon about to change again as the 1135th is heading to Arden Hills, so Austin’s unit will be named the 224th Transportation Company after a ceremony in Austin on Nov. 19.

Besides this deployment to Kuwait, Tolman was deployed to Bosnia and Herzegovina in 2003-04 and Iraq in 2004-05. This is his third deployment. He said he enjoys the work he’s doing here in Kuwait.

“I put together the training when we have down time,” Tolman said. “Whenever we have a mission I help plan and execute.”

Tolman also said he likes being able to take care of the soldiers however he can and to make sure they’re as happy and healthy as they can be while deployed. The 1135th has soldiers with many different job duties, but mostly they’re in the business of fixing and moving things, according to Tolman.

In his little free time at Camp Buehring he likes to communicate with family back home, including wife, Joni, and four children, Johnny, Ethan, Ellie and Addison. He said he thinks the deployment is harder on his family than it is on him, because he’s busy working.

“You leave a big hole and you don’t realize it,” Tolman said. “Being at home is a lot harder than being over here.”

When he returns home he hopes to possibly go on a delayed honeymoon with his wife, and see his kids. He enjoys traveling, camping and doing activities with the family. He misses a lot about Austin, but said he misses El Mariachi and Piggy Blues Barbeque.