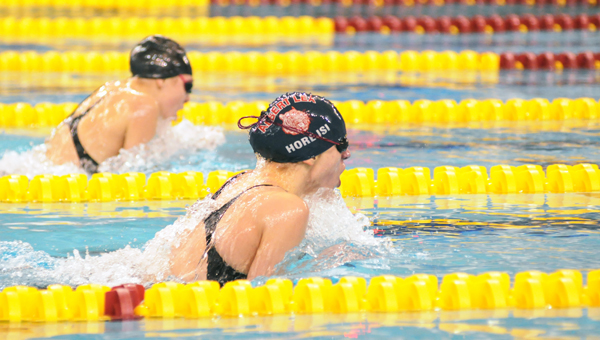 MINNEAPOLIS — When the smoke cleared on Saturday, the Albert Lea girls’ swimmers and divers finished 10th in state after medaling in three events at the Class A finals at the University of Minnesota Aquatic Center.

Lindsey Horejsi placed second in the 100-yard breaststroke, and Karli Kriewall soared from 10th to third in the 1-meter dive. The Tigers’ 200-yard freestyle relay also medaled after an eighth-place finish, and the team scored points in each event it competed in.

“We knew we were a top-10 team going into this,” Tigers coach Jon Schmitz said. “We didn’t place medals in everything but we scored everybody who swam up here.”

The most anticipated race of the day was the 100 breastroke finals where Horejsi, an eighth-grader, was expected to challenge the defending champion, Kathryn Ostrum, of St. Louis Park. Horejsi beat Ostrum over the first 50 yards by 1/10 second but was passed on the final 50 and finished .41 seconds behind the junior.

Horejsi completed the race in a personal-best and school-record 1:05.06. Her time also awarded her All-American consideration.

“She did everything she could,” Schmitz said. “It was the best she had today which is all we can ask for. It was a great race.”

Horejsi, who beat the third-place finisher by nearly 2 1/2 seconds, said she did everything she possibly could to challenge the defending champ.

“I feel really good,” Horejsi said. “I just need to work on more technique on my stroke and I think next year I’ll get it.”

To earn the next title next season, Schmitz said Horejsi needs to just keep doing what’s she’s done to get this far.

“She’s a dedicated person,” Schmitz said. “She’s only in eighth-grade and going against the defending champion who’s a junior. That’s tough and she almost walked away with the title. Ostrum just had a little more strength at the end.”

Albert Lea’s Kriewall also entered the state meet with title hopes but needed to play catch up after finishing in 10th place after the diving preliminaries on Friday. Kriewall scored 102.95 over three dives in the finals and surged to a third-place finish with 329.95 points.

“I wanted top two but with the bad dives I had on Friday I’m fine with third,” said Kriewall, who finished fifth in the state last year. “Iwas kind of freaking out on Friday and after I was in 10th I really wanted podium. After seeing I got podium I really wanted to beat what I got last year.”

The Tigers’ diving coach, Jill Johnson, said she knew there was room for Kriewall to move up the leaderboard entering the finals.

“She just did her job,” Johnson said. “She performed her last three dives exactly the way she knew how and she did great. It was very fun.”

The Tigers’ 200 freestyle relay of seniors Galen Schulz and Morgan Field and eighth-graders Anna Andersen and Horejsi, placed eighth and earned a spot on the podium after finishing in 1:40.40. The foursome was seeded ninth entering the state meet and slipped into sixth during the preliminaries after school-record time of 1:39.50.