Memorialservices for Priscilla C. “Perky” Smith, of Albert Lea, will be held at 1:30 p.m. Wednesday at the United Methodist Church of Albert Lea. The Rev. Tom Biatek will officiate. Interment will be in Hillcrest Cemetery. Visitation will be from 4 to 7 p.m. Tuesday at Bonnerup Funeral Service, Albert Lea, and one hour before the service at the church. 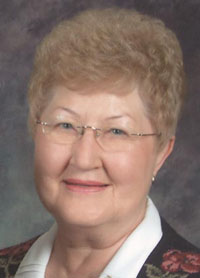 Priscilla was born on April 15, 1933, in Alden, the daughter of Theodore and Ruby (Walker) Payne. She graduated from Alden High School. Perky married Charles W. Smith on Oct. 20, 1956, at the United Methodist Church, Albert Lea.

She worked as a secretary for Wilson and Co. and Interstate Power, Albert Lea and McMurtry Paint and Glass and Mt. States Tel & Tel, Denver, Colo. Charles and Perky lived in Cheyenne, Wyo., Alexandria, La., and Anchorage, Alaska, until Charles retired from the U.S. Airforce in 1967 and they moved to Albert Lea.

She was a member of the United Methodist Church, the V.F.W. Auxiliary where she had served as past local and district president, American Legion Auxiliary, Eagles Auxiliary, Law Enforcement Auxiliary, Domestic Engineers Home Extension Club and the Red Hat Society.

She enjoyed traveling, sewing, decorating and especially spending time with her children and grandchildren, who were the love of her life.

She was preceded in death by her parents: Ted and Ruby Payne, and son-in-law Scott Sorenson.

Perky fought non-hodgkins lymphoma for 11 years undergoing numerous infusion, chemotherapy and radiation treatments. She fought it to the end, and kept her positive attitude and faith in prayer and Jesus. She is now at rest, blessed be her memory.