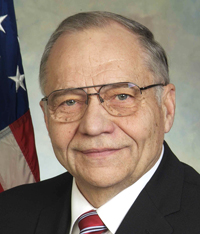 “It’ll be around Thanksgiving,” said Quist, who finished second to state Rep. Randy Demmer of Hayfield in the 2010 Republican endorsement fight to take on Walz.

Quist announced his strong interest in running again in 2012 just as state Sen. Mike Parry of Waseca kicked off his campaign for the Republican endorsement with a two-day swing to all of the larger cities in the 1st Congressional District, including a 10 a.m. stop today at the Mankato Happy Chef.

Parry is “trying to hit it hard out of the chute” in an attempt to scare other potential GOP challengers from entering the race, Quist said. Five candidates ran campaigns for the party endorsement in 2010 with four aggressively seeking the support of delegates at the endorsing convention in Mankato in April of 2010.

After eight rounds of balloting by delegates from across southern Minnesota, Quist and Demmer were the last candidates standing. But trailing Demmer 55 percent to 43, Quist conceded.

Despite Democrats taking a drubbing nationwide last year, Walz beat Demmer by 5 percentage points in the general election. Demmer, who also unsuccessfully sought the endorsement in 2008, has announced he won’t make a third run for the congressional seat.

Quist said 2010 showed him the head-start Demmer had from running back-to-back campaigns for the Republican Party slot against Walz.

“Randy Demmer had a lot of support from two years before, from the previous run,” Quist said. “That’s the advantage I feel I have today.”

One of the most conservative members of the Minnesota House during his three terms in the 1980s, Quist said the 2010 endorsement battle involved three very conservative candidates and Demmer, who he characterized as moderate and a candidate backed by establishment Republicans.

That left Demmer with no competition for that piece of the party while Quist, Iraq War veteran Jim Engstrand of Pine Island and former Congressman Tom Hagedorn’s son Jim split the remaining, more conservative Republican delegates.

The 2012 endorsement fight will be different, Quist said.

“You don’t have the conservative-moderate split now,” he said.

Criticism of the 2009 health care reform plan passed by a then-Democratic Congress and supported by Walz was central to Quist’s campaign two years ago. That continues to be a point of emphasis for the retired Bethany Lutheran College government instructor, but he also quickly brings up the skyrocketing national debt.

“Washington is broken. We’re going over the cliff,” he said. “… It’s certainly more obvious than it was two years ago.”

With Democrats controlling the White House and both houses of Congress in April of 2010, Quist issued dire warnings to delegates — saying Democratic leaders were consciously plotting to end America’s independent status in favor of joining a world government.

Despite a Republican resurgence in America since then, Quist’s website continues to warn of international efforts to create a single global government.

The seriousness of the threats Quist sees facing America makes it a time when leaders need to step forward, he said. That’s what he said he’s been hearing from supporters, and the 67-year-old sounded ready to answer the call.

“I have more energy than I know what to do with,” he said. “… Retirement is not on the radar screen.”

Living on the northern edge of the 1st District, Quist could find his farm in a different district than Walz when new lines are finalized by a judicial redistricting panel in February. But Quist said he is considering getting apartments in Mankato and Rochester anyway to reduce travel time when campaigning — something that could also allow him to establish residence in the new district.

Plus the farm, if it doesn’t end up in Walz’s district, could be part of a western Minnesota district with Rep. Collin Peterson, who is also a Democrat. Quist said he wouldn’t rule out running in a district that stretches to northwestern Minnesota either.

“It would be pretty much the same whether it’s Walz or Collin Peterson,” he said. “It won’t matter much to my thinking.”