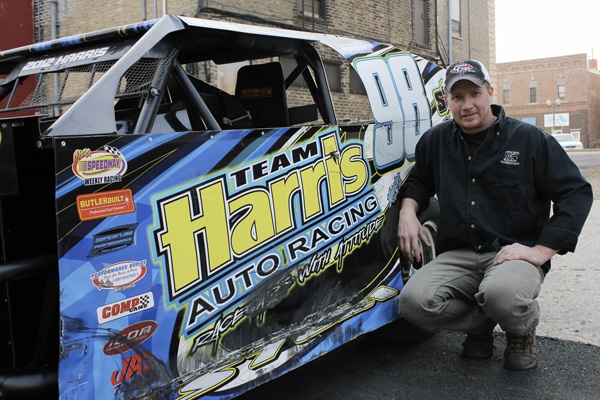 Kevin Stoa, of Albert Lea, and his No. 98 modified race car were featured on the front of November’s Dick Berggren’s Speedway Illustrated. A four-page story claims Stoa is “quickly moving to the front of the field” of engine building. -- Andrew Dyrdal/Albert Lea Tribune

Kevin Stoa has had a hand in a nearly 100 racing wins this season — it just wasn’t on the steering wheel.

Stoa, of Albert Lea, opened Kevin Stoa Engineering in town almost two years ago and now builds engines for 80 modified race car drivers across the nation. Already an accomplished driver, Stoa’s engines have won almost 100 features this season, grabbing the attention of some of the sport’s biggest names. 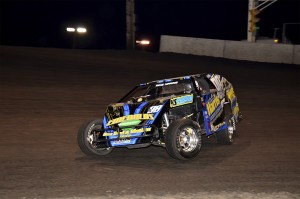 Kevin Stoa races in his No. 98 car earlier this summer in an IMCA modified race. -- Buck Monson/BuckMonsonPhoto.com

A representative for legendary NFL coach and NASCAR team owner Joe Gibbs called Stoa the “up-and-coming engine builder in the Midwest,” while on a visit to Albert Lea this summer.

In an even greater thrill, Stoa was featured this month on the cover of Dick Berggren’s Speedway Illustrated, a national, monthly motorsports magazine. Stoa and his black and blue No. 98 modified race car are shown zooming across the Boone, Iowa, Speedway with the headline “New Leader!: An inside look at Kevin Stoa’s winning modified engines,” printed above.

But the soft spoken Stoa is staying levelheaded despite all the fanfare because two years ago he didn’t even have a job.

As a 1987 graduate of Albert Lea High School, Stoa studied at Riverland Community College before working in two race engine shops until 2006. From there he caught a break and was hired by Chip Ganassi’s NASCAR Sprint Cup team to build engines for its cars. In 2009 the team shut down as a result of the economic downturn and Stoa, who always wanted to open his own shop, could no longer afford not to.

“I always wanted to start my own shop but never had the courage to do it,” Stoa said. “Unemployment pretty much forced me to do it.” 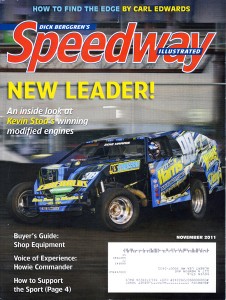 So on Jan. 1, 2010, KS Engineering was born, and according to Speedway Illustrated is “quickly moving to the front of the field. Just like its namesake and founder, Kevin Stoa.”

Writers at Speedway Illustrated developed a relationship with Stoa while he way in the prime of his racing career (he raced only 15 times this season). When the magazine wanted to do a story on modified engines, it reached out to the shop owner and flew a writer into town for two days in late May.

The four-page spread, which was written and photographed by Sam Logan, contains a short story accompanied by a photo package chronicling Stoa build an engine in his shop. The story was the first of a three-part series and will continue in the December and January issues of the magazine.

Stoa left Monday to race in the Duel in the Desert on a half-mile dirt track at Las Vegas Motor Speedway. Stoa doesn’t race as often as he used to but does it to stay connected to his customers.

“It’s good to be a driver and kind of stay in touch with others,” Stoa said. “It helps the business.”

While most of Stoa’s customers are from Iowa, where he established himself as a top-notch engineer, he also has customers from California, Colorado, Texas and Oklahoma.

“It continues to grow,” Stoa said. “It’s word of mouth. I haven’t really done any advertising.”

Stoa’s shop doesn’t do any advertising for him, either. The building, at 117 North Newton Ave., is tucked in the alleyway behind Power 96 Radio. It has no signs and the only thing distinguishing it from just another garage is the company’s logo displayed on the door.

“I took a leap of faith,” Stoa said. “It continues to grow.”