Funeral services for Ralph Edward Johnson, 80, of Albert Lea will be held at 10:30 a.m. Thursday at St. Paul Lutheran Church in Conger. The Rev. Daphne Hamborg will officiate. Interment will be at Hillcrest Cemetery with military honors accorded by Freeborn County area veteran’s organizations. Visitation will be from 4 to 7 p.m. Wednesday and one hour prior to the service at the church. To sign the guest book, go to www.bayviewfuneral.com. 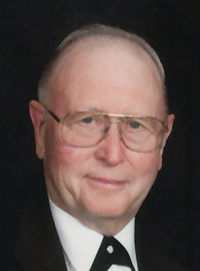 Ralph Edward Johnson was born on July 14, 1931, to Reuben and Dorthea (Schmidt) Johnson in Alden Township. He grew up on the family farm there and attended District No. 89 school through eighth grade. Ralph graduated from Alden High School in 1949. He served his country in the United States Army during the Korean conflict. On May 27, 1953, Ralph was united in marriage to Betty Jane Blake at First Lutheran Church in Albert Lea. Ralph enjoyed farming and believed in hard work. He was an active member of St. Paul Lutheran Church having served on church council. He had also served on the board for the Senior Center. Ralph was also a member of the Elks, Eagles and American Legion Post 56. He had a wonderful collection of farm toys and enjoyed bowling, playing cards, yard work and even enjoyed helping with housecleaning. Ralph and Betty enjoyed camping, traveling and spending winters in Texas. He had a wonderful personality and always made everyone laugh. Blessed be his memory.