Reporter is off to Mideast

By the time you’re reading this, I will have landed in Kuwait City and been driven to Camp Buehring. Because of the time change — nine hours ahead — and the Tribune’s deadline, I won’t have any on-the-ground coverage for the Deployed in Kuwait series until Monday. 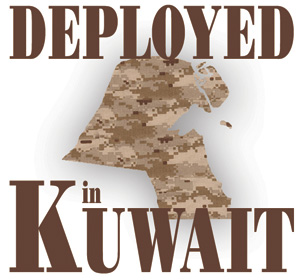 This week I hope to have many different kinds of stories to show what life is like for soldiers on the base. I have many ideas, and some will work out while others will not. There may also be stories that I hadn’t thought about that I will find.

Some of my story ideas include featuring different jobs of soldiers in Albert Lea’s Delta Company and Austin’s 1135th Combat Support Company. I’ll also be curious to learn about what they do when they’re not working, how they communicate with family back home and much more about what daily life is like in Kuwait.

I’ll be following up on some stories that I had been working on before getting to Kuwait. One will be finding soldiers who received homemade, embroidered pillow cases from Lori Nelson, of Alden, whose son is in Delta Company. I’ve interviewed her about the pillowcases and will find the soldiers to get a photo with them and talk to them about receiving the gift from Nelson.

Another project I’ll be working on is having soldiers answer questions from Sue Ellis’ advisory class at Southwest Middle School. The students have compiled a list of 20 questions they want soldiers to answer. I’ll record the soldiers on video answering the questions and edit the footage when I return to the States.

While I’m in Kuwait, staff at the Tribune and Austin Daily Herald will be helping me with stories by finding family members like Darci Buchan, of Austin, whose daughter, Brianna, is serving in Kuwait.

All stories are subject to change depending on when soldiers are available to talk, as some are on missions at any given time. I will still be available via email while in Kuwait so don’t hesitate to contact me at kelli.lageson@albertleatribune.com.

Also be sure to check out my blog, Kelli in Kuwait, on the Tribune and Herald websites to see what the adventure has been like for me.