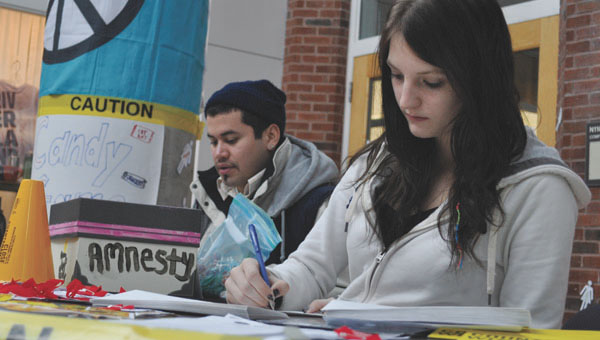 “There’s been a lot of killings and murders,” said Gustavo Xicara, Riverland student. 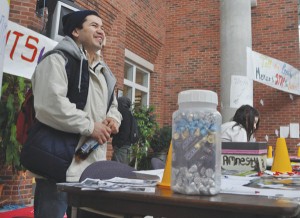 Gustavo Xicara talks with fellow students about Riverland’s Amnesty group and the work it’s doing to bring awareness to the murders of women in Ciudad Juarez. -- Trey Mewes/Albert Lea Tribune

Riverland’s Amnesty International group is bringing attention to the murders in Juarez as part of Human Rights Week. Though the group annually celebrates Human Rights Week by highlighting a cause, students and volunteers are outdoing themselves.

The group will mail more than 400 pink crosses to the Mexican government, including Mexican President Felipe Calderon and the chief of police in Juarez, Julian Leyzaola. Pink crosses are the recognized sign of the women who have been kidnapped, raped, tortured and murdered near Juarez since 1993.

Though 400 murders is the government’s official tally, Juarez locals claim between 3,000 and 5,000 women have been murdered, which Amnesty volunteers say is probably closer to the truth. What’s more, since Juarez is on the border with Texas, many Americans are swept up by the murders, as well as the gang-related violence.

The letters volunteers mail to Calderon and Leyzaola beg them to stop the murders by first doing away with the reportedly widespread corruption among Mexico’s law enforcement and political offices.

Riverland students invite the public to share in a few events at the college this week. There will be a presentation all week at the main entrance of Riverland’s East building about the ongoing murders in Juarez.

A viewing and discussion of the documentary “Radioactive Challenge,” which deals with nuclear weapons, will take place from 12:30 to 1:30 p.m. today in room C125 at the East building.

There will be a bake sale Wednesday at the main entrance from 10 a.m. to 2 p.m., along with a presentation at 1 p.m. Wednesday inside room C123 in the East building about the murders in Ciudad Juarez.

Students hope their efforts can help the situation in some way.

“Hopefully it will get their attention that other countries are taking notice,” Xicara said.