A memorial service will be held for Robert (Rob) Allen Moszer, 33, of Castle Rock, Colo., at 11 a.m. Saturday at Central Freeborn Lutheran Church, Albert Lea. The Rev. Matthew Griggs will officiate. Rob passed away on Saturday, Oct. 29, at Rose Medical Center in Denver, Colo., after a courageous battle with ALS. 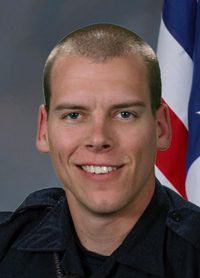 Rob was born in Bismarck, N.D., on July 20, 1978. He graduated from Albert Lea High School, and received a bachelor of science in law enforcement from Minnesota State University, Mankato. Rob worked as a detention deputy for Blue Earth County before being accepted into the Aurora Police Academy of Aurora, Colo.

Rob proudly served the Aurora Police Department as a police officer for seven years. At the end of his service, he was selected as an honorary SWAT officer. Rob enjoyed many outdoor activities including skiing, dirt-biking, hiking and spending time with his family and friends.

Rob is survived by his wife Rachel; parents: Barry and Wendy Moszer; sister, Amber (Bronson) Power; grandparents: Earl and Ruth Thompson; and extended family members. He was preceded in death by grandparents, Ervin and Myra Moszer.

Memorials can be directed to Cops Fighting Cancer or the Muscular Dystrophy Association.