Memorial services for Roger G. Nelson, of Albert Lea, will be held at 11 a.m. Saturday at the Redeemer Lutheran Church in Alden. The Rev. Greg Ofsdahl will officiate. Friends may greet the family one hour prior to the service at the church. Interment will be in the Alden Cemetery. Military honors will be accorded by the Alden American Legion Group. 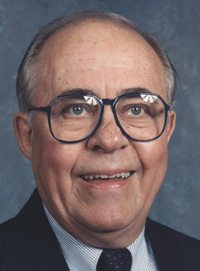 Roger was born Oct. 6, 1920, in Albert Lea, the son of Carl and Mary (Rasmussen) Nelson. He graduated from Alden High School in 1938 and received training at the Rogers and Benner Beauty School.

Roger served our country from 1942 to 1946 as a U.S. Army Engineer serving one year in New Guinea and one year in the Philippine Islands. Following his return from the service, he lived in Alden and had the Alden Beauty Shop from 1947 – 1952.

He managed Skinner’s Beauty Salon in Albert Lea from 1952 to 1970, moving into Albert Lea in the 1960’s. Roger owned the Looking Glass Shops in Albert Lea, Wells and Waseca. He sold his shops in 1970 and moved to Minneapolis where he sold men’s clothing at a Young- Quinlan Store. He later moved to California where he spent many hours doing volunteer work, returning to Albert Lea in 1991.

Roger was a member of the Redeemer Lutheran Church in Alden. He was a past member of the Albert Lea Chamber of Commerce, the V.F.W., and the American Legion.

He was preceded in death by his parents, brothers Leslie Nelson and Curtis Nelson; sister, Sylvia Thompson; and niece, Jane Hixon’s husband Donald.