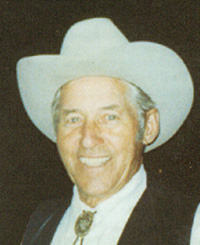 Roy was born March 19, 1920, in rural Scarville, Iowa, to Ode and Ole Johnson. The third of six children, he was raised on the family farm just south of Scarville, where he learned early in life the value of hard work. A trait he carried with him in everything he did for the rest of his life. Roy went to school in Scarville and graduated in the class of 1937.

Upon graduation, he worked in the area for various farmers and merchants, as well as, on the family farm. He was ultimately employed by the Grotewold Hatchery in Lake Mills, Iowa, where he worked for a number of years. A horseback riding injury, which nearly cost him his leg, kept him out of World War II, despite the fact that he tried to enlist three different times. However, that didn’t prevent the war from touching him deeply and personally. His older brother George, who was also his best friend, was killed in action in Germany during the last days of the war in April 1945.

In August of 1945, Roy married Yvonne (Bonnie) Grotewold of Lake Mills, Iowa – the boss’s daughter. In 1946, they moved to Buffalo Center when they purchased the hatchery and feed mill there. The business was renamed Roy B. Johnson Hatchery. He lived in Buffalo Center the rest of his life and loved the community.

In 1947, their first child, Gary, was born. They subsequently had three more children: Roy, Jean, and Dave.

Over the years, Roy became a business, civic, and church leader in Buffalo Center, and was very involved in innumerable aspects of the town’s life. He served three terms as Mayor, donating his pay to buy the “Welcome to Buffalo Center” sign outside of town. He also served on the church council of the Bethlehem Lutheran Church, where he and Bonnie have been members for 65 years, and where he held various other positions including teaching Sunday school. He served on the board of the Centre Stage Players for 24 years, as well as, other various boards and organizations. Roy conducted hundreds of charity auctions over the decades for many different groups and churches in the area. He also ‘called’ many square dances during the nineteen fifties and sixties. From that, “The Little Ranch Hands” was formed; a group of local children ages 5 to 7 who performed square dances all over northern Iowa and southern Minnesota and regularly appeared on KGLO-TV in Mason City, Iowa. In 1958, Roy and Bonnie opened the A&W Drive-In (now the BC Restaurant) with their partners, the late Charlie and Arlene DeVries. It became a central meeting place in town serving up to one thousand cars over a big weekend. They sold that business in 1969.

In the early 1950s, Roy went into the Shetland pony business with the late Bill Meyers. They owned upward of 250 ponies and, for several years, they sponsored a nationally recognized two-day consignment pony auction. It was at these auctions that Roy got his start in the auctioneering business. Most didn’t know it, but auctioneering is what he had wanted to do since he was a boy.

From that point on, he scrambled after every auction he could get, and even opened a consignment auction house on Main Street in Buffalo Center for several years. By 1965, he was so busy with his auction ‘side-business’ that he ‘retired from working,’ by his definition, and sold the hatchery and feed store. Becoming a full-time auctioneer, Roy went on an amazing run – conducting over 6000 auctions over the next 40 years, culminating with the honor of being the first non-Minnesotan auctioneer ever inducted into the Minnesota Auctioneers Hall of Fame in 2000.

He was preceded in death by his parents; brother, Gordon, who died as a child; his brother, George; brother, Reuben (Wells, Minnesota); and sister, Marjorie (Lenexa, Kansas).

Roy’s life was defined by his faith in God, his positive outlook on life, his belief in hard work, and his love of people. He was a friendly, caring, loyal, and generous man with a keen sense of humor. He always understood the important things in life – God, family, and friends. His legacy lives on through his loving wife Bonnie of 66 years; his children: Gary (and wife Joan) of Moorpark, Calif., Roy (and wife Judi) of Noblesville, Ind., Jean (and husband Steve) of Goodyear, Ariz., and Dave (and wife Diane) of Moorpark, Calif.; as well as four grandchildren: Alexandra Johnson of Santa Monica, Calif., Matthew Johnson, a senior at Columbia University, New York City, and twins: Roy and Kaia Johnson, seniors at Purdue University; his sister, Doris Olsen of Wells; brothers-in-Law, Don (Doris) Grotewold of Lake Mills, Iowa; Gerald (Betty) Grotewold of Phoenix, Ariz.; sisters-in-Law, Ramona Twito of Lake Mills, Iowa; Marjorie (Peter) Tardiff of Scottsdale, Ariz.; and many nieces, nephews, in-laws, and friends.

The family would like to thank all the staff at Timely Mission Nursing Home for their incredible kindness and dedication over the last couple of months. Also, thank you to the Rev. Perry, friends, and family who gave Roy such joy and comfort to his last days. Our loss is Heaven’s gain.